I have kind of an serious problem - I also sent this to testing@emclient.com but I thought it might be good to also post it here:

I received an E-Mail and one of the two attached PDF files was corrupt.

As it´s an IMAP account I looked in the web-interface and there the file shows as 100 kb, and can also be saved and opened as the 100 kb file.

I then moved the e-mail around in em client (to a different IMAP account) and now the corrupt 28 kb file is also on the Server. So I supposed the PDF file was somehow corrupted / gotten smaller and when moving around em-client uploaded the corrupted file to the other IMAP account.

Thre is also a signature error with this e-mail 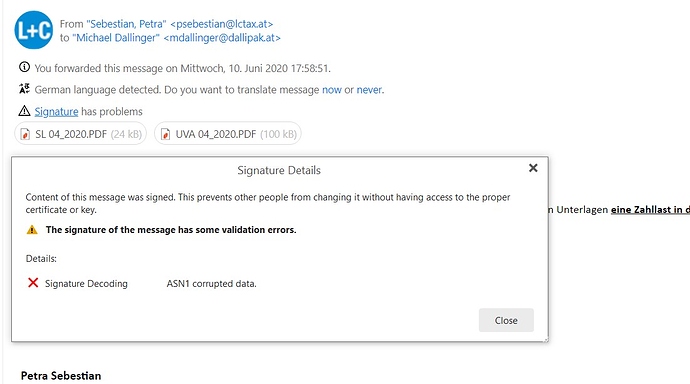 Edit: I also have a second e-mails of this sender with the Signature problems and one corrupted PDF attachment.

Hi, That 100kb .pdf file sounds very small and might be eg: partially corrupted in some way. I have had lots of .pdf files sent to me over the years where the file size is correct, but the file won’t open & 99% of the time was corrupted.

I would test sending a .pdf file from your alternative email address (you know is ok) to your EM Client address and see if it opens. If it does open ok, then advise the sender of the problem and ask them to resend the pdf file.

Are you able to open any other pdf files in EM Client ?. Also what V8 Beta are you running ?. You can d/l the latest Beta from this https://www.emclient.com/release-history

I personally have not had any issue as yet opening any .pdf files with any V8 Betas.

If I go to my webinterface for the IMAP account I could download the 100 kb file and open it just fine.

testing@emclient.com wrote me back to reproduce the issue and send log files. I will try to do that

There were instances in the past where the user could open the attachment using another email client, or the web interface, but not eM Client. This is because of a mis-configuration on the server.

Even if it happens only sometimes it is a bug which should be sorted out.

Yes, most likely a bug with the server, though there are also a bunch of issues still to be resolved with the beta.

Hope to hear soon that you have a solution.

Hi Mike4001,
I have the same issue with digitally signed messages in eM8.
It is so confusing, because sometimes the PDF attachment is corrupted the way it can not be opened. Adobe Reader (Foxit reader) shows “File is corrupted”.
Another time the PDF file is corrupted so curiosly that Adobe reader opens it but some text is corrupted, format is corrupted etc.
There have to be some bug in signed messages processing in eM8…
It is very dangerous because eM’s behavior is not consistent.
I prefer if application fails so thus it fails the same way every time.

Please also send this to testing@emclient.com so the devs can hopefully sort this out soon.

On a sidenote => These messages are received correctly in em client 7.

So this is definitely not a serve-side issue as @Gary suggested.

Yes, this is eM8 bug. Not mail server issue.

I had reported more than 10 other bugs in eM8, except attachment corruption in signed messages.

Are there any news regarding this issue?

Hi, are there any news?

Ver 8.0.2951 still suffer from signed e-mails processing. I received couple of invoices as a attachment of digitaly signed message and all the PDF files are corrupted. I have to open it from webmail interface.

Yes, issue is still not fixed and it is very annying and a critical bug …

Is this bug acknowledged by the devs?

I short response would be appreciated.

Come on guys … every PDF in a signed E-Mail is corrupt.

Did the response from the devs got deletet ?

I don’t see it anymore.

Hi Michael, what brand is your mail server?

It´s supposed to be one of Germanys biggest Webhosters …

I use Kerio Connect. I thought if it could be related to mail server. It seems improbable.