Hi, I am a relatively new eM Client user, recently discovering it as an option to gain access to my iCloud address book and calendars, after switching from a MacBook Pro that I handed over to my wife, to a Windows 10 laptop. I’m also running it on my iMac, for consistency, but have not totally switched over from Apple Mail just yet.

So - my first question is - how do I set my IMAP accounts to store sent mail, drafts, etc, LOCALLY. I only see options to type the name of the IMAP folder, or have it automatically detected.

My second question is this. If I use eM Client and let it store my sent mail on the server, does the Archive function (manual or automatic) archive my Sent folders, as well as the Inbox and other folders on Gmail or iCloud IMAP accounts? Can you control where the archived Sent mail goes for each account? That is assuming that local archiving or automatic archiving even touches the Sent folder that is…

I have LOTS of mail, going back decades, and really don’t want to fill up my quota on Gmail by storing everything up there. Any advice is appreciated.

how do I set my IMAP accounts to store sent mail, drafts, etc, LOCALLY

With sent messages you can do this with a Rule. 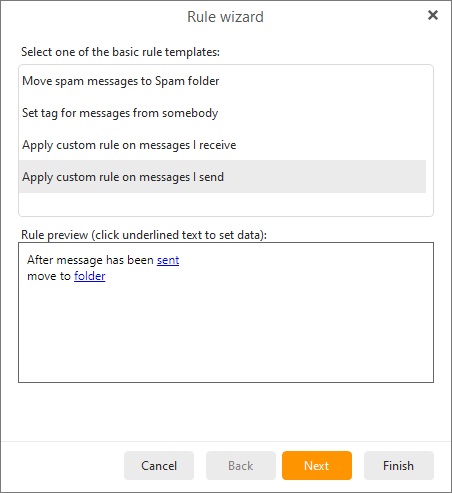 Just be aware that if you move the sent messages to Local Folders, they will not be included in Conversations.

Drafts you cannot store anywhere else.

If I use eM Client and let it store my sent mail on the server, does the Archive function (manual or automatic) archive my Sent folders, as well as the Inbox and other folders on Gmail or iCloud IMAP accounts?

The two archive functions work differently. Manual archiving moves the selected message(s) to a single folder on the server. Automatic Archiving moves any messages over a specified age to a mirrored local set of folders. It includes all folders that you select in the scope, so Inbox, Inbox and sub-folders or all folders.

If I use the automatic archiving, and let it create a mirrored set of local folders, do conversations still work?

Apple Mail shows conversation threads regardless of what folder (local or IMAP) the relevant messages are in. I would have expected eM Client to do the same. Lately though, I’ve found conversations to be almost a distraction from just showing my inbox in received order, and I have debated turning it off.

Conversation still work, but the eM Client implementation means that the conversation messages need to be within the same set of account folders. In this regard Local Folders and the Archive created by Automatic Archiving can each be considered a separate account. They will have conversations within their own set of folders, but a message in the Local Folder Inbox cannot be part of a conversation in the Gmail Inbox.

I proposed some years back that Conversations could be configurable to include multiple accounts, but I guess it has not been considered.

Gary, one last question on the subject of archiving.

I have a home server running a RAID array, and have IMAP setup on that, as a place I can archive mail from multiple computers, and see it - basically an “unlimited” IMAP storage compared to Gmail, iCloud, etc. At least until the drives fill up, which I don’t foresee.

Can the auto archiving be setup to archive into another IMAP server? I.e. I want to clean my Gmail account up to stay within quota by doing the auto archiving, but rather than going to the Local Folders, go to the “Home Server” IMAP folder tree instead. Is that possible?

Thanks for all your help!

Can the auto archiving be setup to archive into another IMAP server?

The purpose of Automatic Archiving is to move messages from the server to local folders to free up space on the server. So there is no option to move them from one server to another.

I’ve turned on automatic archiving, with the default setting of 21 days, with All Folders selected for just my least used and smallest Gmail account. I then clicked the button on the dialog to do archiving. However, I see no indication that it has happened, and see no local folders corresponding to that Gmail account. Maybe I don’t understand where it is supposed to end up, as all the year old stuff is still sitting in the Inbox and Sent folders for that Gmail account, according to eM Client.

Understood. I will just archive locally.

see no local folders corresponding to that Gmail account

A new set of folders called Archive should appear below Local Folders. 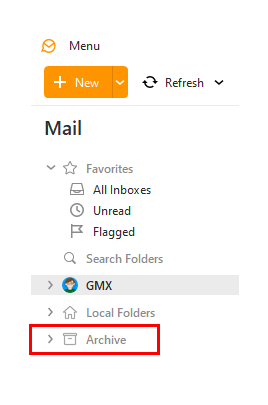 Ok - I just had a pop up asking if I wanted to perform archiving now. So I guess it didn’t happen yet. I told it to go ahead, and not warn me again. Right now there is no Archive tree yet, so I guess it just hasn’t gotten around to creating it quite yet. I’ll watch for a while and see what happens.