I am on the trial period of eM Client and am really enjoying it. Coming from Evolution (Linux) I feel at home and would acquire a license in a heartbeat if it was not for the extremely poor performance that I get after some time using the software.
The machine I am using is pretty beefy (new MacBook M1 Max with 64GB ram), so my expectation was that I would not have performance issues. Yet, I noticed that when running eM Client my battery goes down way faster. Also, after some time the software starts to get unresponsive (e.g. you type and the character takes a while to appear, the interface gets sluggish, etc).

Upon verification I noticed that the software uses substantially more resources than the rest of the machine, getting first place in all resource utilization categories of Activity Monitor. In a nutshell:

In all of the above, eM Client was idle, with no activity listed in the “Operations” window.
I am adding the screenshot of the energy utilization for reference. It was taken just after a reboot.

My best guess is that it taxes Apple’s Rosetta emulator, since as far as I know eM Client is not native to M1 chips. Yet, it does look too much of a tax for me, so I wonder whether I am missing anything here (e.g. some magical setup option, etc). My setup has 9 accounts: 3 MS Exchange, 1 Gmail, 2 iCloud, and 3 IMAP.
I did want to try V9, which I heard it is native, but I cannot install it since there is a bug with v9 that affects MS Exchange accounts.

Please, let me known if I am missing anything. I really like the software and want to use it, but this performance issue renders the email unusable. 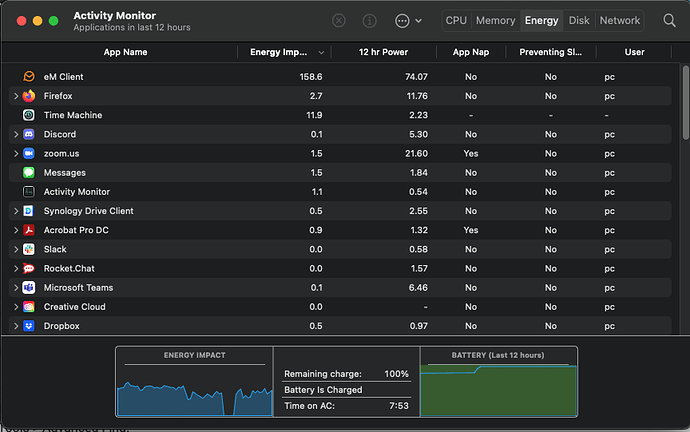 There is a known memory leak issue with eM Client on macOS which has been there for a long time.

When I first load eM Client it takes around 400MB memory but it is currently showing as 2.3GB after being open for a couple of days. I think this is being worked on as part of the v9 development but for now the recommendation is to close and restart eM Client on a regular basis.

V9 for Mac OS X is native, and also uses a newer version of the framework it was developed with which should help with the overall performance of the client. So I would keep watching “Release History | eM Client” for the actual V9 release (it is at BETA3 currently) which will hopefully fix the bugs you outlined and have been brought up prior. I am sure they are working hard in the background trying to make sure the V9 release for Mac OS X is as good as possible so it can be considered release quality. Once they do please try your tests again in V9 and update this post if things have improved or not.