Email Replies go to me not sender

New to eM Client. It has been working well until yesterday. Now, when I click to ‘Reply’ to emails, it brings up my name/Email address in ‘To’, whereas it should be the Senders Name/email. Can’t find any settings that control this. Help required.

Problem seems to have fixed itself. Reply Name/Email are now correctly set to ‘Sender’ not ‘Me’.
Ironically this happened immediately after getting the Account Activation email from this forum.

This problem is now back again.
Not always, but often, when I click to reply to an email it sends it to ‘me’, not the sender.
Anybody else have this problem?
What’s the fix?

When you click reply to a sender, is the senders email address in the to line ?

No, that’s the problem! It puts my name & email address in ‘To’ when I click Reply; not always but often. It happens too often for the Contacts details to have been corrupted.
I have just tested Reply on 4 emails received & they all came up with my name/email in ‘To’. Checked Contacts folder and they all have the correct name/email, not mine. Also checked body of emails with mouse hover & details are senders, not mine.
Ironically, a test reply to your notification email correctly put your details in ‘To’!

Here is an example of a recent Reply that had my name/email in ‘To’: 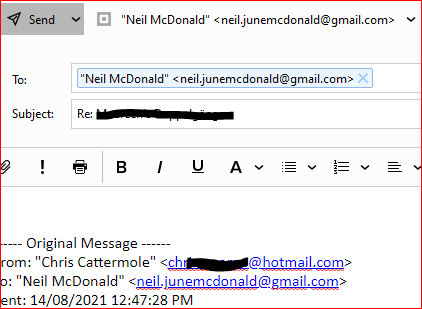 Ah ok. That is then very strange.

I would next “go online to your webmail” and see if it also reply’s with your own email address.

Tried a Reply in eM Client - it put my email in ‘To’.
Tried Reply on same email in Gmail - it correctly put the sender in 'To".

Further testing shows:
It’s happening on just about every email now, even yours.
Also:

What happens when you reply to a sender online via webmail ?

Can you make a backup using Menu > Backup, then go to Menu > Accounts and remove the email account from eM Client. Finally, add the account back again.

Does that make any difference?

For cyberzork - As previously advised, replies in webmail (Gmail) work OK.
For Gary - Haven’t tried B/U & Restore yet. I believe I am getting to bottom of issue, but need to do some testing for a couple of days. Will advise further.

Ok as everything is ok in Gmail via webmail, then does sound like an eM Client database issue and would agree with @Gary to backup EMC as Gary advised and then remove and re-add your Gmail acct.

Failing that backup eM Client again and uninstall the program and delete the database on uninstall when asked and then reinstall the latest version from the release history page and setup Gmail as new. https://www.emclient.com/release-history

I have not run the backup & restore or the re-install as I found that it is a software issue, not a ‘corruption’ problem.

The error of Replies going to ‘Me’, not the Sender, happens often, but not always. Extensive testing has shown the following:

All replies, no matter what folder they are in, should always go to the ‘Sender’. I can see no logical reason why a reply should ever go to ‘Me’ rather than the Sender.

Although I have found a work-around to this issue, I believe the problem should be fixed so that all replies in eM Client (Sent folder) work the same way as Gmail.

I have not run the backup & restore

Well, I never said to backup and restore. That would just put you right back with the same database, which is probably the issue.

I said to make a backup, then remove and re-add the account.

Maybe I’m missing something here!
Why do you move messages to the sent folder?
The sent folder is for what it says - messages that have been replied to (sent) and are placed in the sent folder automatically, it is not a repository for messages waiting to be dealt with, further it’s a mystery to me as to why you use the trash folder for the same purpose
It is of course up to you how you organnize your work
The reason that messages replied to from the sent folder are addressed to you is that eMC naturally believes that they have previously been sent and as such the message has the sender ‘you’ designated as ‘from’

You also suggest that:
“All replies, no matter what folder they are in, should always go to the ‘Sender’. I can see no logical reason why a reply should ever go to ‘Me’ rather than the Sender.”

Think about what you are suggesting, - I’ll do it for you, with any message that you had sent you would be the ‘Sender’

There is no problem to fix!

Are you suggesting a complete takeover by (Google) Gmail?

This does bring up another point that is - there is no action to ‘send again’ in eMC, something that was in Eudora and very, very useful; it would be an excellent addition to eMC rather than needing to use forward, it would also overcome your perceived problem.

OK, ‘Restore’ was the wrong word - should have said “then remove and re-add the account”.
As per separate post issue has been identified.

When I clear messages from Inbox I want to keep a copy (of the original). If I have replied, yes the reply is in Sent, but I was moving the original (inwards) message to Sent also, as somewhere to store it. I now move it to a (new) Received folder. If I don’t reply immediately I move it to Under Action. I don’t use the Trash folder as a repository - when an email is deleted from Inbox, it goes to Trash.

It is somewhat of a stretch for you to say “Are you suggesting a complete takeover by (Google) Gmail?”. Comments such as this are unhelpful & insulting; I was simply pointing out that GMail handles Sent messages differently & I believe correctly - replies from any folder always go to the other party, not ‘Me’.

Were you suggesting a complete takeover by Eudora! No, just pointing a difference between systems.

Re “Reply Again”, I find that when I reply again (a further reply to a previous reply I have sent), that the reply goes to the other party, not ‘Me’.

Notwithstanding I have re-read your post and draw your attention to:

I freely admit that I am not a fan of Google/Gmail and believe it’s popularity stems from the fact that in the most part it is free - I do not allow Google/Gmail installed on any of our computers (260 at the last count) and we have not suffered from this.

I also take issue with your remarks:

Although I have found a work-around to this issue, I believe the problem should be FIXED [sic eMC} so that all replies in eM Client (Sent folder) work the same way as Gmail.
In my opinion there is nothing to be fixed as eMC is working as intended.

Finally with regard to my comments concerning Eudura there is no comparison as I was suggesting an enhancement feature you were suggesting the correction of a fault that doesn’t exist.