I’ve been happily using em client for some time to connect to my gmail accounts. However, after updating em client one of my gmail accounts is asking for re-verifciation, but in doing so it wants to access and control all of my gmail files! This seems rather over the top - I want to use em client for my mails and calendar and nothing else. Is there a way to just give it access to those? I can’t now access my mail through em client, and am very wary of pressing ‘Allow’ 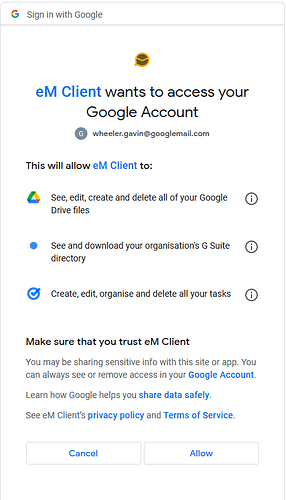 The Google Allow option window you are seeing as your screenshot showing with Drive and Tasks etc is correct & normal when you add a Google workspace accounts in eM Client" using the automatic OAuth email setup.

You are just telling Google to “allow eM Client access” to your Google account otherwise it won’t normally work.

eM Client is then shown as an an allowed app in your Google security section in third party apps.

Normally when you setup your Google account in eM Client via the automatic wizard you would normally see “mail, calendar, contacts, tasks, drive”, etc on the “Allow Access” Google window, so could be this specific account just didn’t show all the Google options when you initially added it before and it’s just prompting you to confirm.

If you only want to just have Mail and Calendar after adding a Google account in eM Client, you can disable those options showing in eM Client. I personally just normally leave them enabled.

Thanks for the helpful information.

Is a change for eM client 9? Does it now asks for extra permissions compared to eM client 8, such as full access to google drive?

Is there extra functionality in em client 9, that it requires permission to access google drive files?

Thanks in advance for your help

Is a change for eM client 9? Does it now asks for extra permissions compared to eM client 8, such as full access to google drive

No difference in permissions that I’m aware of when adding Google accounts. However someone will update this thread if incorrect. eM Client has supported the same secure Google OAuth sign-in permissions method since version eM Client 7

As I said above it could just be when that Google account was added previously it didn’t bring up those other normal Google options as it allways does for me when adding a Google account.

The only other thing I can think of is there is an option in V9 where you can add attachments via Google drive but that is usually optional anyway and you still have to allow that if you add it in. Similar when adding Dropbox, OneDrive etc.

So if you had previously eg: added Google Drive to eM Client for attachments and the Allow Google drive option maybe “did not appear at that time” to authorise eM Client now may have just prompted you to allow it as detected it.

You can see if you have previously added Google Drive for attachments in eM Client via “Menu / Settings / Mail / Attachments”.

So if you have allowed Google drive in eM Client attachments and don’t want that option, you can just remove / delete it in the above section. Then go to your Google security and remove eM Client Google Drive access. It’s normally “shown separately” from the main eM Client access in the Google Security third party apps section.

Thanks for all of the information! Its really helpful. I’ve got eM client set up again now, and am happy with what it is doing.