Why is this happening? I just noticed it last week on a VERY small list I emailed via the “Mass Email” feature (sent out to about 20 recipients) and noticed that all had received a duplicate BLANK BCC EMAIL! I just sent out another “Mass Email” to about 75 recipients and all 75 messages appear to have went out correctly but then about 10 minutes later, in my “Sent” items there are the exact same number of sent items showing sent to “undisclosed recipient” and BCC (insert one blank BCC email for each original recipient). This is the exact thing trying to AVOID when sending mass email and what gets our email flagged as SPAM!

Please fix - I’m working so don’t have time to diagnose or test how to fix etc. This feature is the main reason I paid for Pro License and need it to work for my job! When paying for a pro license you expect the software to work so this is very frustrating. It wasn’t broke before. EM client updated to 9.1.2109 - now it’s broke. It seems like every time they issue an “update” something else goes wrong. This issue is a MAJOR one though to the point that I have almost had it with EM client. Email should never choose on its own to send “duplicate” emails unless user error - especially not a BLANK BCC email when I don’t tell it to send a BCC email! This is a programming issue and needs to be resolved ASAP!

It just happened again, so now it is happening every time if I use the “Mass Email” feature. FYI it is connecting to a Gmail account and I am connected through VPN if that matters.
******* UPDATE #1: I just ran another small test to only 11 emails while being disconnected from my VPN and the issue does not seem to have happened this test. Will run another larger test not connected to VPN and follow up with updates… If this helps prevent the issue, the next question will remain to be WHY does it do this (when connected through VPN)?
******* UPDATE #2: I just ran 2nd test to 60 recipients without being connected to my VPN. I now have 60 ADDITIONAL BLANK EMAILS sent to “undisclosed recipients” and BCC’d to each email on my 60-name list that show were already sent successfully 7 minutes prior to the blank email. HOUSTON WE HAVE A PROBLEM - PLEASE HELP!
******* UPDATE #3: Ran a 3rd test - not connected to VPN - same problem. It appears each time it happens that EM client is having an issue connecting with Gmail because they sit for a LONG time in the outbox even though they already show up in SENT folder. No response to my post and no email back from info@emclient.com or sales@emclient.com yet. Having to send emails out one by one which basically means I’m not doing my job at this point. Need Help. Thanks.

Thanks Gary. I appreciate the support. Name one other software that doesn’t offer some form of tech support outside of a user forum. This software is a joke. Pretty sure that was the straw that just broke camel’s back.

It appears that your 1-year PRO license support period expired in April 2022.
Regrettably, that means that we can’t offer you VIP Support for this issue.

If you want to get another year of VIP support, please do so at: Pricing | The best email client for Windows and Mac | eM Client
There is an option at the end of the page.

Otherwise you can post your questions to our community forum, [https://forum.emclient.com] where other users may be able to assist you.

@HMer If you are seeing random “No Subject Blank emails” automatically being generated after sending emails with the recipient email addresses in the bcc line, that is a current issue that’s only happened since the V9.1.2109 upgrade. That issue is still being investigated.

The No Subject Blank emails being automatically sent also happened to me with a Gmail account when Forwarding Draft emails with attachments as per the below Thread. I also don’t use a VPN at all, so nothing to do with that.

Thanx for the response! Looks like same exact issue but not sure it is specific to only forwards. I just ran a test to 50 recipients as a NEW email and it doesn’t appear to have happened this time. However, I also sent ONE SINGLE email out to a work colleague yesterday who got a blank BCC email from me on a new, single email (not sent as “mass email”).

@HMer Yes it also has happened to other users when just sending new emails as you said.

Just sent another run to 75 recipients - this time I watched it happen in real time. New email (not forwarded or draft) and was not connected through VPN. It sent perfectly fine to every single email and showed as sent both directly in Gmail and also in emClient. Even though it had already sent, it still showed the 75 emails stuck in Outbox on emClient, and the “refresh” wheel was spinning for about 8-9 minutes. Then it’s like it double-tapped a second BCC email to every recipient. Here’s a screenshot of my outbox in emClient (looks exactly same in my gmail less the obvious formatting differences). 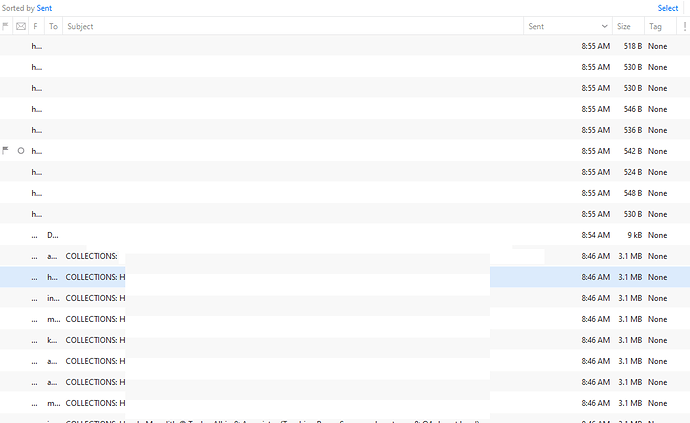 UPDATE - Issue still happening: Duplicate email to “Undisclosed Recipient” - BCC (original recipient). It also happens on individual emails but not as frequently as on the “mass email” feature. So far, have determined that it has nothing to do with “mass email” or VPN etc. Its been 3 days since original post and still no response from anyone with EM Client to any thread on this forum regarding the same issue/s - hopefully because they are working diligently to get the problem resolved. Will wait & see. Until then, just having to keep responding with explanation to everyone that receives a random blank email from me.

Its been 3 days since original post and still no response from anyone.

There is a fix for this hopefully on the next interim update soon. It will be updated on the version history page when it becomes available.

I hope so - Gmail just disabled my account yesterday because of all the emails I’ve been sending (about twice the normal amount to be exact lol!

Any update on this? I have the same problem

No update. Last I heard was that they were aware of the issue and working on it. It seems to not be happening as often on single emails so I’m getting by for now since I’ve already sent out my quarterlies but the holidays are pretty much here so really need my bulk emails not to send duplicates. Hopefully they fix it soon, otherwise I’ll have to look for another option.

I just got a blank BCC email from myself sending a reminder to myself for Monday morning so they STILL don’t have their problem fixed!

I’m about to install T-bird. Done.

V9.2.1185 for Windows has just been released and is supposed to have a fix for a similar issue. You can try this new version and see if it fixes the issue you outlined:

The 9.2.1222 update appears to have fixed the BCC problem, but now appears to have another issue that I will report separately with freezing up on sending (and sometimes adding contacts) while linking to a commercial Gmail account.

The 9.2.1222 update appears to have fixed the BCC problem, but now appears to have another issue that I will report separately with freezing up on sending (and sometimes adding contacts) while linking to a commercial Gmail account.

If you have eM Client for Windows, there is a new just released interim update V9.2.1553 on the release history page that you might then like to try. https://www.emclient.com/release-history

Note:- Before updating backup eM Client via “Menu / Backup” incase you need to restore. You can see when the backup is complete via “Menu / Show Operations” in the dropdown next to refresh.

Ran the update (before I read your message about backing up) but luckily everything seems to be there and is now working much more consistently stable than it was prior to the update. Prior to the update I was having to hard close EMClient about 1x per hour. It only froze once today after the update which is a major improvement. Will definitely make sure to back up in future before running updates though!