I see there are other threads from other versions related to this issue but I wanted to report it for 8.1.979 (65fd04a). I am noticing that most times, > 50% a click of the notification or the task bar icon does not bring focus to Emclient. It seems to happen when the window state is fully maximized. This is somewhat annoying. Once I manually find the window it works for a while, it is difficult to determine what causes this or how to reproduce it. I am going to create a ticket for it.

@dma2112 If clicking on EM Client does not restore focus when you click on EMC in the taskbar or in the tray, that’s not normally an EMC issue. I personally don’t have that issue with the same V 8.1.979 using Win 10 V 20H2.

Its usually some problem with what’s currently in memory on your local computer, where something (in memory) is preventing the minimized task to re-open. Open Task manager and see what’s running in the Startup Tab and Users Tab.

Apart from what’s running resident in memory at the time of the restore focus issue, this can also be related to hardware issues like eg: glitchy ram sticks, glitchy graphic drivers, outdated motherboard drivers etc. So make sure you have the latest drivers for your computer and also update to the latest version of Windows if you haven’t already. If everything already up to date, try a rebooting your pc.

Also try restoring focus to EMC by using Alt-Tab keys, or Windows-Tab keys and see if that works.

hey there, thanks for the reply. I am a windows apps developer and am pretty aware of focus issues as I troubleshoot my apps with them as needed. A click on the taskbar icon is a priority 1 call to an app to bring it to the foreground, and if it is able, it will. I have 10+ apps running at any given time, many development environments/database clients and no other app ever has responded as this one does. When it happens, it turns color, but does not restore focus. I immediately hit alt+tab and flip to it, and emclient has done its work, ie open the new email from notification or whatever. It just skips the “bring to focus” step. I have had this issue on 2 different machines since early 6.x and I see others reported it here here here

@dma2112 So is the problem that when you get new email (notification banners) in the bottom right corner of Windows, you click the banner and EM Client doesn’t come to the foreground ?.

Also if you click on EM Client on the “Taskbar”
(instead of the banner) when new email notifications arrive, does that bring EM Client to the foreground ?

It’s both, I think they are related. It is probably just some thing with my situation. It just happened now, I clicked a notification “you have 7 new messages” and the notification went away, the emclient icon on the taskbar inversed but it did not change focus for this message I am typing. Once I bring up focus manually it works until the next time.

If i have EMC Notification setting “Disable notifications when the main application window is active” as in the below first example (and have EMC fully maximized in the background) behind other programs, i do get an EMC small notification banner appear (above the tray right hand corner) which when i click on that (does open the new EMC incoming message Ok).

I also get the EMC mail notification (flashing icon) in the Taskbar which i can also click and that also opens EMC main application as normal Ok. 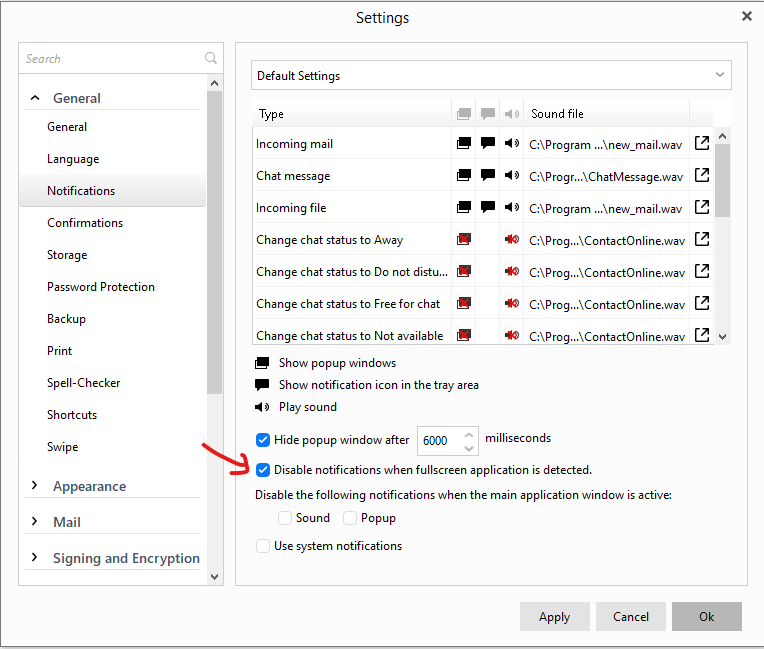 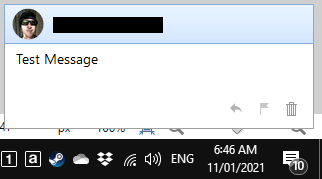 However if i have the setting "Use System Notifications" enabled as in the below example (and again have EMC fully maximized in the background) behind other programs, I do get the System Large EMC notification banner appear (above the tray right hand corner) which when i click on that (does not open the new EMC incoming message). 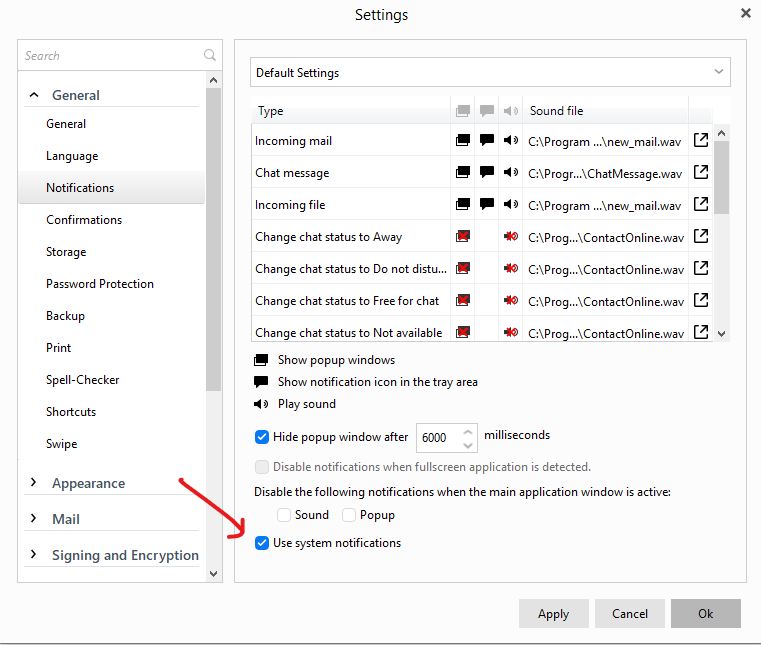 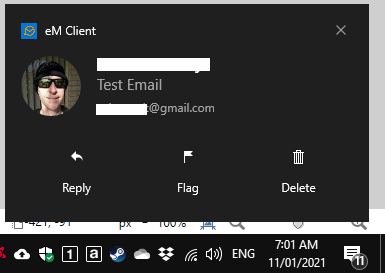 So it appears that using “Use System Notifications” does not bring the new incoming message to the foreground when you click the “Large System Notification Banner” above the Tray which being that EMC is set as the default mailer (in the Win 10 settings) should really open the new message, but doesn’t appear to at all. I don’t know if this is an EMC issue or Windows 10 issue ?.

@dma2112 I have also found since (on both my Win 10 pc’s), if you set in EMC Settings / General “Minimize application to tray” and set in EMC “Use System Notifications” and then (Minimize EMC to the tray), when you get new email System Notification Large Banner in the right corner and you click on the Large Banner, (It Does Open new received emails In Front of other open Applications Ok). See EMC new email message below, which opened (in front of Paint.net) which i was using at the time.

Obviously you can then open the Main EMClient Application nearly instantly as it was only minimized too via whichever way you normally switch to that. But at least this is a work around for the focus problem when clicking the new received email baners.

PS Hopefully this works for you as well 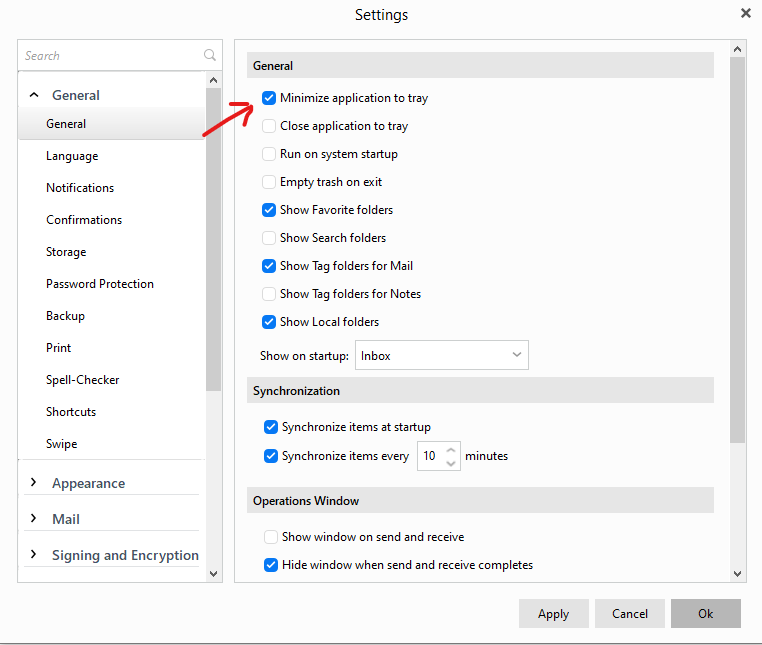 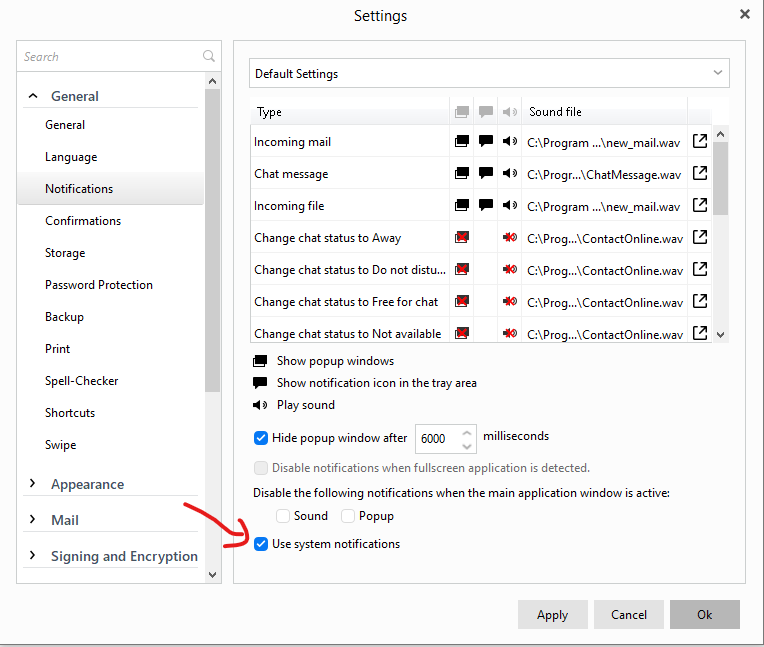 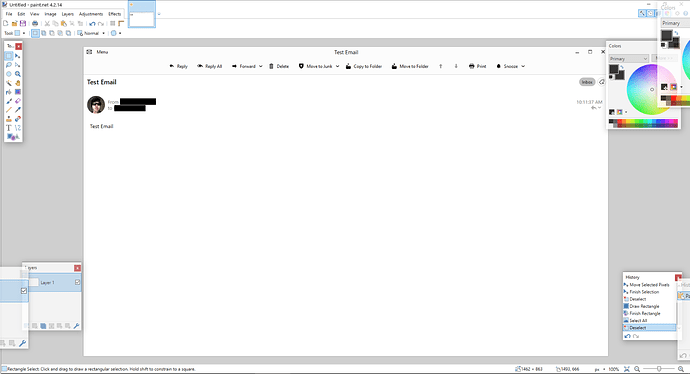 wow! thanks for working through this. I just got confirmation from support, and I am forwarding them this link for your great tests!

Hello,
this is an issue we’re having with Windows. We’re working on getting it fixed.
Thank you for reporting and your understanding!
Best regards,