It would be great to highlight the text (word) being checked. It could be highlighted, underlined, bold, or in a different color as long as it is formatted differently and clearly visible.

I can live with the way the word being checked is presented in the lower left corner of the spell-checking box but only when emails are short and there are very few words to be checked. However, this process becomes very tedious and counter-intuitive in longer emails.

The “red wavy underline” below the text when EMC detects spell check errors with automatic checking (is the standard out there) for 99% of programs & not likely that will change.

The red wavy underline also works with 99% of EMC themes.

Yes it is tedious right clicking single words to correct, but it’s the same to on Mobiles / Tablets with pressing on single text with red underlines.

Thank you @cyberzork for your reply.

Sorry if I wan’t clear enough in my previous post. As you can see below, I’m referring to the spell-checking box. 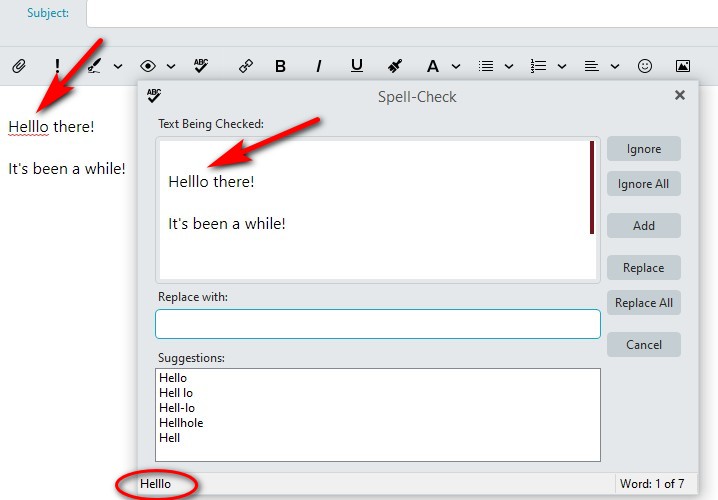 It would be great if the word being checked (“Helllo” in this case) could be highlighted in a way, not because it is incorrect but because it is been checked.

Yes @Son-of-A-Gun the inncorrect spelt words in the “Spell Check” window (should also be showing) the “Red Wavy Underlines” (like in the body of the email) but they are not even in latest 8.1.973 Win version.

I too have this same issue which is annoying and sounds like a bug.

I don’t use the manual spell checker so I can’t say when the underline was removed, but yes, it used to be like that.

I also have the problem of misspelled words no longer being underlined in a manual spell-check prior to sending an email. For lengthy emails, this makes it challenging to locate the misspelled word in the draft (which is sometimes necessary to determine what change is needed).

I, too, consider the lack of highlighting misspelled words as a bug, not a feature.

FWIW, I submitted a ticket (Pro) on this in mid-December, but no response yet other than asking for a screenshot (which I provided).

I have only had EM Client a few weeks so I am still learning. In spell check, it does not highlight the word, only a red line but in a long email I don’t know where the word is, also the spell check box shows up right in the middle of the email so i can’t read most of the email. I must be doing something wrong. Thanks for any help, I’m old and not techie

Apparently this has been fixed and will be back in the 8.2 release.

This has now been fixed in a recent release. Please download the latest from the Release History

However, for the record, and it is not a bad thing at all. Only the first incorrect word is highlighted (with a “red wavy underline” as @cyberzork phrased it). Once an action is taken (word ignored, added or replaced), the next incorrect word is underlined and so on. I really like it this way.

Yes all working great now in the spell check window with latest release 8.1.1060

Thanks, Gary, for this notification (and for all you do on this forum). I installed eMC version 8.1.1060.0 today, and the manual spellcheck now works perfectly. Also thanks to the eMC folks for fixing the problem.