Hi,
what version of eM Client are you using? Could you post here a screenshot of the wrong text appearing? Thank you.

When entering Japanese characters using Windows IME, textfields should contain pre-edit text on-the-spot. Instead of showing the pre-edit text in the text field (at the location of the cursor), it is instead being handled in a separate IME window.

Attached is the screenshot of how the entered text shows up in an IME window instead of allowing the use to pre-edit the converted text on-the-spot.

Image of Slashdot shows the pre-edit text on-the-spot. This allows my converting the text right where the cursor is located.

Image of eM Client’s chat shows how the text entry is handled in a separate IME pop-up window. Please note that this only happens in the tabbed chat window. Email composing, etc. works as expected. 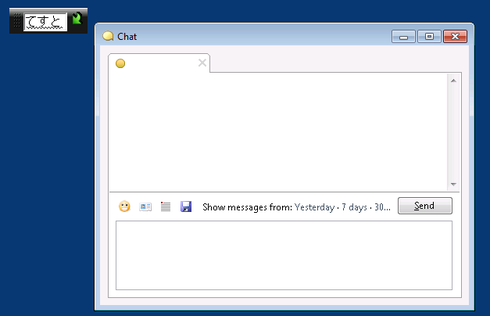 Thank you very much - I have forwarded it to our developers so they will hopefully fix it soon.