Now, if I add a new eM contact with a tag of “Personal” (or any other tag), they will sync to Google BUT only appear grouped with the other “Personal” contacts, but NOT in the Contacts folder itself. (And, yes, I do have corresponding Labels in Google for all Tags in the eM client). However, if I add another label to the contact in Google … any label … (for example, “Family”), then it WILL also appear in “Contacts” in Google and will then sync to my phone.

Now, I noticed in the eM client, when I expanded “Contacts”, that the sub-folders were not checked. So I did that, thinking maybe that was the issue. No Joy, same result. Still shows up only in “{label}” folder in Google and not in “Contacts” UNTIL, again, I add another Label in Google.

Also, this has NOT been the case until recently. Typically when I added a contact in eM, it would sync with my phone, hence it was in “Contacts” in Google. It is just recently that this has changed. How long, I don’t know. I typically add contacts to my phone and they show up in the eM client (so they must also, and do, appear in Google Contacts).

As I said, I’m not sure if this is a Google issue or an eM Client issue, but since they sync when added to my Android phone, I am more inclined to think eM issue.

Sorry this is so verbose, wanted to cover all the bases.

There is a difference between Contacts and My Contacts. Contacts in eM Client is a folder that contains all the contacts regardless of their labels.

In Google, it is not the same. An entry added in eM Client to Contacts will appear in Google in Other Contacts folder (see 1 below) because it does not have a label like Personal or My Contacts. Unlabeled entries will not be included in the Google Contacts section (see 2 below). 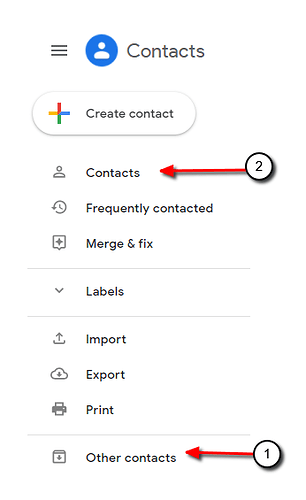 You phone is probably adding new entries to My Contacts by default, and that is working. Do the same in eM Client.

I’m not sure I’m understanding. If you meant, add the contact in eM with a tag “My Contacts”, then that doesn’t get it into “Contacts” into Google. If I add it in eM with that or with no tag, it doesn’t get to google “Contacts”. Interestingly I can search in Google contacts and find it, BUT it does not appear in ANY folder including “Contacts”. They also DO NOT appear in “Other Contacts” in Google. The only way I have found to get it into Google “Contacts” is to add a label to it AFTER it gets into Google. Then it will show up within the “{label}” folder as well as “Contacts”. Nothing I can do (have done at least) in eM will get it to appear in Google “Contacts” and hence it will not populate to my phone. This has not always been the case. Any contact I added in eM regardless of how I tagged it always made it to the “Contacts” folder in Google. I’m not sure when this changed.I have checked settings in eM to see if I have any control of that, and it doesn’t seem that I have. I have also checked setting in Google contacts and, as you are no doubt aware, there are very few settings and none that would control this behaviour. I also checked settings in Gmail, even though it did not seem that there should be any for contacts, and there are none. I can’t find anything that I can do to change this behaviour.

And I appreciate your response. I can tell by your postings that you are quite active in this forum.

It used to be as I described, but it seems to have changed over at Google. I just looked and I don’t even see labels on my Google contacts in their web interface anymore.

Maybe time for me to move them elsewhere.