Is there any way to put the rules in alphabetical order? I have quite a few and it would be easier to manage them that way. Can this be added as a feature?? I’m certainly not the only person frustrated by this shortcoming.

They are listed in the order in which they will be processed, that is why you are able to move them up and down in the list. Sorting them alphabetically will certainly affect that.

Yes, but, won’t having MULTIPLE rules for the same address affect how it’s processed as well?? Clicking on the “Name” column sorts things alphabetically in other programs, why not eMClient?? This is obviously an old issue as I see a post from 6 years ago with the same question as mine. I’m sure that someone should have figured out how to program for that feature by now??

As I said, the Rules are processed in the order they are in the list. If you change that order to alphabetical, Rules that rely on preceding ones, or Rules that stop further processing of other Rules, will be out of order. It is like a recipe for baking a cake. You have the steps but if you decide to rearrange them alphabetically, that is not going to work. Putting bake before mix is not going to give you the desired result.

You can have virtually unlimited Rules apply to the same address, that is not a problem, but the order in which they are processed can be important.

Does that make sense?

It makes sense yes. But, why can’t the list be sorted alphabetically to mange (edit) the rules with a button that returns them to their original order?? They only stay alphabetical for editing. I’m not saying to keep the list alphabetical forever, just to find and fix certain rules and prevent duplicates. Even a search feature would be nice.

This post thread must have taken longer to write than a simple “column” sort.

The point I made, and will make again, is that Rules are listed in the order they are to be  processed. It is a list of instructions to the application to process one by one in that order. That is the same with most email applications. Alphabetical sorting is not going to give you the desired result. Again, if you bake your cake before you mix the ingredients, what will be the result? Sure the OCD chef might think recipe looks nice if the instructions are sorted alphabetically, but the instructions are given in a specific order, for a reason. The same with Rules. If you have not yet grasped the analogy I gave; they are processed in the order they appear in the list. That is why the Spam filter Rule should be at the top, not sorted down after P, Q, R. That is so that it can process spam first. No point in applying a Rule call Grandma first, which forwards incoming message to your grandma before processing Spam. The poor dear will just end up with all your junk!

We can all see the point you are making Gary but we don’t all use rules in that way. All my rules are independent of each other and it doesn’t matter which order they are checked in with maybe Spam the only one that should come first. I only use rules to divert new mail to their appropriate folders of which I have very many. I’ve only been using eM Client for a few weeks and I have already got over 50 rules for mail diversion and it’s becoming difficult to see if a rule already exists for a mail folder.
Alternatively a search facility of rules names might be useful.

Same for me … looking through them without any option to sort is problematic, especially when you have a few dozen of them.

What you need to understand is that this is not a list of Rules. Rather it is a sequence of instructions which are applied in that specific order. Maybe it would work for them to be applied alphabetically in some instances, but looking at mine, it would not work. I certainly don’t want a forwarding Rule to be applied before the Spam filter Rule has run.

Maybe my explanations above were not clear. Sorry about that.

I’m sure @Gary that we all understand what you are saying but some of us will continue to use it as list of rules as it’s the only way to automatically sort our incoming emails into folders. Is there another way?

I don’t think you do understand.

Rules in eM Client are like a recipe. They are applied in the order you see in the list. At the top of the list should always be the Spam filter Rule, then any Blacklist Rules. That is because you want to weed out those junk messages before you start automatically sorting them into folders.

And if you have a Rule that is forwarding messages to your boss, you absolutely don’t want that to run before the Spam filter Rule, even if it begins with a lower letter.

After those spam-type Rules you can have the Rules that move messages to folders. You also need to understand that if you have two Rules to move messages, call them Rule A and Rule B, and a message meets both Rule’s criteria, when sorted alphabetically it will first be moved to the folder specified in Rule A, and then it will be moved to the folder specified in Rule B. That might not really be what you want, and you would prefer Rule B to run before Rule A. So you cannot use alphabetical sorting of Rules to achieve that because Rule B would have to precede Rule A in the list.

Yes I see that but I don’t use them like that. We could argue endlessly. Actually I don’t advocate sorting the rules alphabetically but a search function would be useful. I notice that there is already a suggestion for some kind of search of rules. Anyway I won’t say any more.

I can see both sides of the argument here. The rules, which have been improved with the latest release, still need some work. The number one requirement would be a search feature, as that is generally why someone wants them in alphabetical order, so they can find the rule that applies to an email. When you have hundreds of rules trying to find a specific rule that relates to an email can be frustrating and time wasting. Another option would be to be able to add a “process number” to the rule so that if you sort the rules alphabetically the “process number” (the order in which the rules are run) is not affected.

Other improvements would be to enable the rules window as a separate window to emails so that you can select the text/email address etc in the email while formulating the rule. currently you have to close the rules down to get to an email to copy details to add to the rule. Also when searching for folders in the rules, should be able to select the child of the parent folder that you searched for. Sometimes you know the name of the main folder but not the name of the sub folder that you want to move the email to.

Also when you click on “run rule on folder” the dropdown for the applied rules selection is not re-sizable so you can’t tell which rule you are selecting. 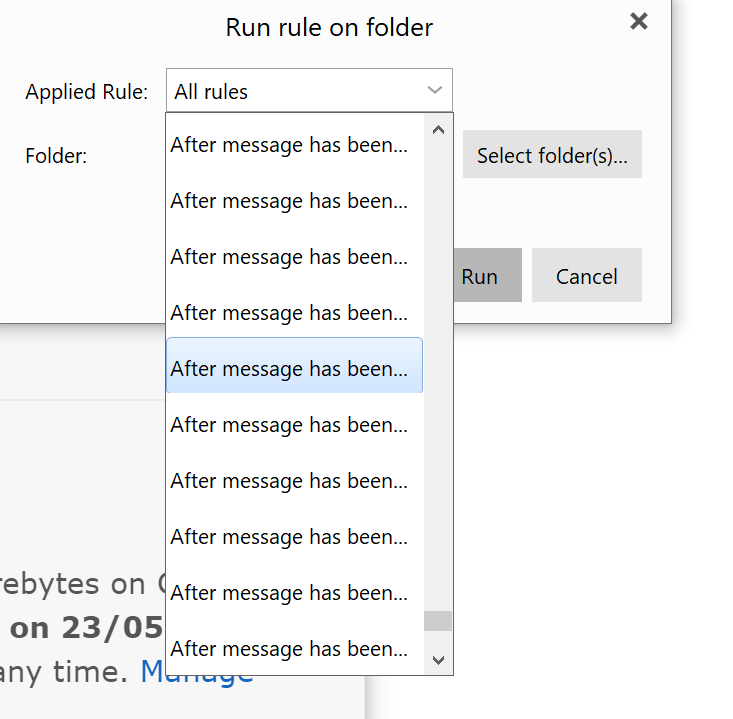 We decided to implement search in rules. This will be available in the next update.
Run rule in folder interface is already redesigned in v. 9.1, so the issue in the last screenshot should no longer be an issue.