I recently moved from Outlook to eM Client because I tired of Outlook rules not working, being hard to manage, and Outlook’s poor user interface. Now I find that eM rules don’t reliably work either. Part of the problem is inadequate documentation. If they won’t tell you how it works and it doesn’t work, you can’t make sense of it. That’s the problem I’m facing with eM Client.

I’m trying to use local (client-side) rules to sort mail into different folders.

Why don’t rules run automatically on (POP) messages arriving in the Inbox? This I can’t figure out.

eM guru Gary repeatedly states: “Rules only apply automatically to new messages as they arrive in your Inbox.” Got it, maybe. What I think this means is only 1 (one) sorting rule will run on a message. Once a message is out of the Inbox, a rule won’t automatically run. Which brings up the next issue.

Do rules run (in priority) from top to bottom or bottom to top? All the help file says is: “Change priority of rules: Just select the rule in the list and click Move up or Move down.” Documentation that falls short for sure. If only 1 rule applies, priority makes all the difference.

Someone please explain how to make rules sort mail automatically. Thank you in advance.

Rules, if set up properly, work consistently for me automatically!
Incoming email passes through the rules from top to bottom until it reaches a rule that states “Stop Processing” or reaches the end of the rules list.

What version of eMC are you running?
Windows version?

It will help if you display the rule(s) you are having an issue with.

I’m running the latest version of eM Client. No, rules do not work, or at least not reliably or predictably.

The Rules apply in order so if there is a message from Amazon in the consumer account Inbox, it will first move to the Amazon folder, then the last Rule will move it to the consumer folder.

If that is the case, then the Rule to move messages to the Amazon folder will need the stop processing other Rules option as @sunriseal mentioned. 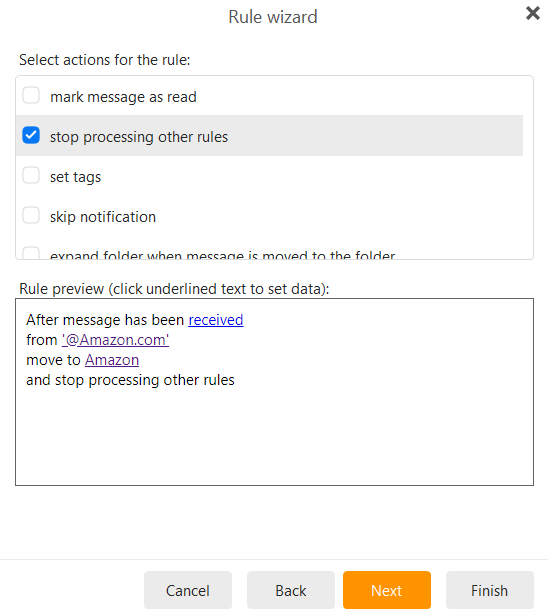 Thank you for the help.