I am currently evaluating Em Client and have a problem with rules.

I have set up several rules that move messages from the account inbox to various Local Folders that I have created. These rules work OK.

However, when I added another rule, at the bottom of the list, that moves messages from the account inbox to the Local Folders inbox, the rules higher in the list (which I thought were processed first) ceased to work, and all messages ended up in the Local Folders Inbox.

What am I doing wrong?

What I’m trying to achieve is to have certain messages from the main account inbox moved into appropriate Local Folders and the residue of unfiltered messages moved to the Local Folders Inbox. How can I achieve this?

One option is to change the order of the Rules.

Another option is to add the following line to the Rule: 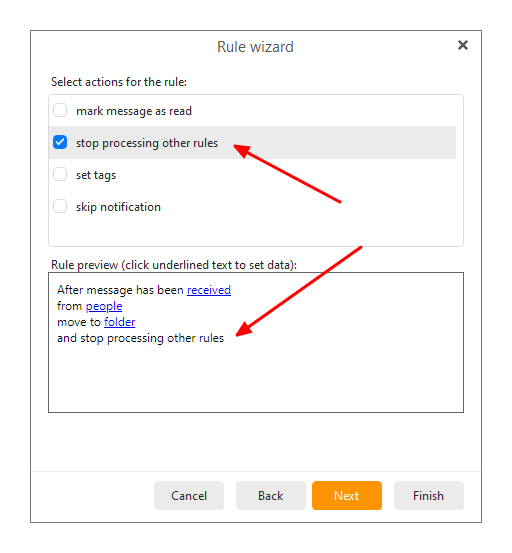 This will move the message to one of the Local Folders, and then block any other Rules from affecting that message.

Many thanks. So far the first method seems to work fine, so I’ll stick with that.

You just need to remember that when a message arrives, all the Rules will be applied to it in sequence. So before, you had a Rule being applied to move it to a specific folder if it met some criteria, but then the next Rule was moving it to the Local Folder Inbox. So it got moved around a bit and ended up in the Inbox. Now a Rule moves it to the Inbox, and then the next Rule will move it to a specific folder if it meets some other criteria.