Rule to delete emails marked as spam by email server not working. 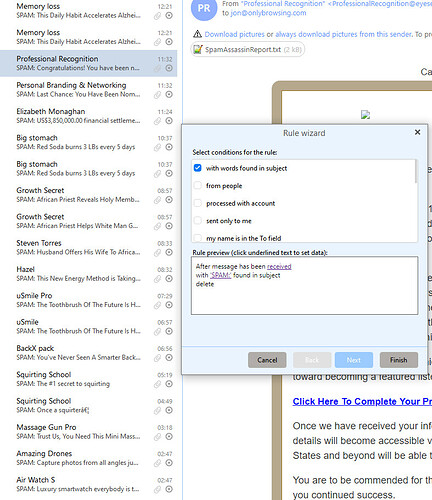 Try this rule instead: (Move Spam Messages to Spam Folder)

After message has been [received]
with [‘X-Spam-Status: Yes’, ‘X-Spam: yes’]
Delete

Have you never found a message in spam that was not meant to be there?

I think it is a very dangerous idea to automatically delete messages marked a spam. Why not just leave them in your Junk folder? You can periodically empty it, or your server may already offer a retention option on that folder to delete them after some time.

Have you never found a message in spam that was not meant to be there?

Yes, that’s why I delete the messages, rather than deleting them permanently. I’ve have dozens of email addresses for decades, so I get a lot of spam, sometimes a hundred or so a day. A quick scan through the trash makes it easier to spot false positives than checking them in the inbox, where they’re mixed in with genuine emails.

Whatever the wisdom of doing what I’ve decided to do, I have a rule which fails to work, which is why I’m asking for a solution here.

Thanks for the suggestion, although those particular words don’t appear in the header.

Additionally, if I run the rule manually, it does work. It’s just not working automatically.

if I run the rule manually, it does work. It’s just not working automatically

The procedure is that eM Client only applies Rules to new unread messages as they arrive in your Inbox.

Maybe because the server is altering the message subject, it is no longer considered new by eM Client, and is disregarded.

That would certainly explain the problem.

If true, it begs the question as to why a message is considered read, despite having just arrived at the client. After all, the rule is set to trigger “after a message is received with ‘Spam:’ found in the subject”. It’s not conditional on the message being unaltered on its way through the server. As an ex-analyst/ programmer, I see that as a design flaw.

Thanks for your help.

As an ex-analyst/ programmer, I see that as a design flaw.

Thanks for the suggestion but that’s the very first thing I tried when I realised the rule was failing.

Not knowing how many rules the software supports, and I have a lot, I wondered if I’d reached a limit and the last rule in the list wasn’t being run.

I was hoping for a fix but it looks as if I’m going to have to try to find a workaround.
Is there any way to mark all messages unread the first time the client sees them?

OK, I too have MANY rules (about 75-100). I use the header information to match against. Can you display what the header contains for the “SUBJECT:” line that contains the “Spam” info?

The problem appears to be that the server has altered the message by adding the ‘SPAM:’ tag, so the client is seeing it as read and isn’t running any rules against it.

Unless there’s a way to get the client to process all emails the first time it sees them, I think I’m stymied and will have to look at other clients, which is a pain. I currently have about 250 rules, after deleting a few dozen, and don’t fancy having to set those up again in other software.