Problems with folders in Inbox, Gmail

There is a challenge with the Gmail Inbox in eM client. The mailbox is at Google named Inbox, uppercase I, the rest lowercase. When you in eM are creating a folder/label in the Inbox, could be test, then a folder/label named INBOX/test is created. All letters in INBOX are uppercase. Unfortunately, Gmail is case sensitive. As long as you are in eM you can se everything, also webmail is showing everything, but on Apple equipment the mail client is looking in to Inbox, the original folder/label name with uppercase I, the rest lowercase… The INBOX/test is therefor not visible.

This results in that every folder/label created or edited in the Inbox are not visible on Apple equipment. We have seen it on iPhone/iPad, MAC may also be affected.

eM therefor has to name the initial label Inbox, not INBOX. This is a problem for our company.

There is a challenge with the Gmail Inbox in eM client. The mailbox is at Google named Inbox, uppercase I, the rest lowercase.

The default Inbox in Gmail / eM Client is “Uppercase I” and “lower case nbox” (Inbox) as in my Gmail eM Client account example below. The same as Gmail online. Not sure why your Gmail account Inbox is in uppercase. I suspect one of your devices is causing the Inbox to change on the Gmail online end to “All Uppercase” so that is then reflected in eM Client the same being an IMAP account.

If i make a test label under the Gmail Inbox in eM Client it also looks the same & no problems.

I also use eM Client for Mac and its exactly the same lower case Inbox for Gmail accounts. 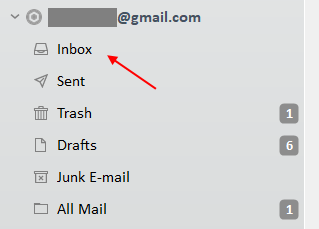 My inbox is not INBOX, it is Inbox when I look in the Webmail. The problem is when eM Client is creating a new label in the Inbox, that is named INBOX/test not Inbox/test, so the problem is the way eM is creating the label, they seems to force uppercase for al letters for INBOX.

When I i webmail change the label to Inbox/test it works again on IOS devices. When I create an new label in Inbox/test, again as example test, is is again named INBOX/test/test when it is created from eM, NOT from Webmail or from the IOS device.

The problem is definitely related to eM client. Try to compare you example with the labels in Webmail. 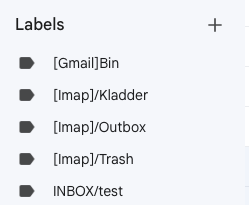 It is correct that Apple Mail on MAC does not have that problem, but what is strange, now I can no longer recreate the problem on the IOS device. My iPhone did not get an update.

so the problem is the way eM is creating the label, they seems to force uppercase for al letters for INBOX.

eM Client for me with a Gmail account using eM Client V7.x, 8.x or 9.x “does not ever change Inbox to all uppercase” when creating labels.

As in my example above when I created the test label off the Inbox the Inbox parent folder stayed the same and is still “Inbox/test”.

So that’s what I’m saying if you are creating labels off your Gmail Inbox and the Inbox then automatically changes to all uppercase after creating the label, then something outside of eM Client is cause that to happen. I cannot replicate that same problem creating any labels.

I haven’t seen this issue either. I have several Apple accounts running into my eM Client and have never seen an issue with eM trying to change the case of any folder… my Inbox is “Inbox” just as it should…

I’d have to agree, another email client being used is causing the change in case or the creation of the foler…