When I try to print an email, I immediately get the following error appears:

How can I fix the problem? It’s really important!

which version of Internet Explorer are you using? If it is not the highest available, we recommend you to upgrade it.
Otherwise you can try to reset IE settings according to the steps described here http://windows.microsoft.com/en-US/wi… - it often resolves a lot of issues.
If none of the above suggestions work, please forward the email as an attachment directly to me at bambuch@emclient.com and I will try to help you further.

Unfortunately, the reset does not help. The error message still appears.

I have a version of Internet Explorer: 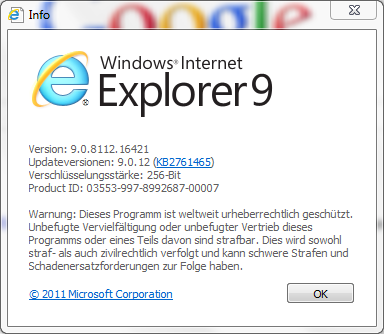 according to my search on Google this is quite common problem with IE9 and mostly Canon drivers and is not caused on our side. You can try to disable third-party browser extensions described here http://social.technet.microsoft.com/F…
In the post here http://www.ehow.com/info_12179143_the… the KB2522422 hotfix is mentioned, so if the above solution does not help, you can try to download and install the hotfix from http://www.microsoft.com/en-us/downlo…

Edit: Please make sure you are using the latest printer drivers

I have a Samsung printer.

I downloaded the hotfix and tried to install, however, a message appears that this file is not suitable for my computer.

Printing still does not work. With my father in the other not. Seems to be due to eM Client.

Then I have to take a detour and print the e-mails only in PDF.

I have one more question: Can you print a webpage directly from IE?

And as i noticed, you probably need the German hotfix from here http://www.microsoft.com/de-de/downlo…

Actually can print anything from Internet Explorer.

I downloaded the hotfix and run. The following message appears (German language required):

Thanks, Johnny Loh! Had the same problem; downloaded the Universal Driver at: http://www.samsung.com/uk/support/model/ML-2525/SEE  for my Samsung ML-2525. Works now!