I have found a newly created “$Phishing” folder in my main email account (my domain on Gmail).

I guess it is eM Client being protective, but 100% of the entries are erroneous - including recent (unpaid) satellite TV bills, stuff I had forgotten about from 10 or so years ago and emails I’ve sent.

Is there a way to train it? [ot kill it] - He asks knowing the answer and the reality will probably be different

$Phishing also seems to have bought along $NotJunk and NotJunk - is there a Wiki about this stuff?

Those folders are created by Google.

I’m not confident in your answer.

My wife who does not use eM does not have $Phishing in either her Gmail account or her my-domain-at-Gmail account.

The only accounts I’ve found it in are Gmail accounts that have been accessed through eM.

I do believe the $Phishing folder/tag was created by eM Client.
After a decade using Gmail without a local client, I started using eM Client yesterday.
Just then the $Phishing folder appeared.
Even after I remove all content from $Phishing folder, and delete that label from my Gmail account, in eM Client the $Phishing tag is still appearing and there is no way to delete it. See snapshot:
https://drive.google.com/uc?id=1c-grVGPTlFQcuklG4mshCENykb9WuQdL
If someone from eM Client side could confirm it…

After some research, I found a thread in Reddit in which some people associated the appeareance of $Phising folder and eM Client:
“A new folder called “$Phishing” has appeared in my gMail account. Where could it have come from? : techsupport” 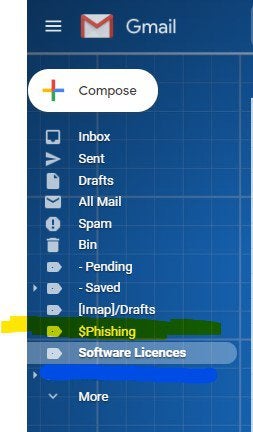 r/techsupport - A new folder called "$Phishing" has appeared in my gMail...

=> Does anyone know how to disable eM Client from creating the $Phising folder?

eM Client does interpret Gmail labels as folders, so that could be where it comes from. But there are some issues with eM Client and Google. Have you ever noticed in eM Client that there is a Coworkers folder in Google Contacts? It is not there in the web interface for Google Contacts, at least not anymore, but it still exists as some bug on their server, so eM Client shows it.

This could be something similar as it only shows up with Gmail accounts. It is not something that eM Client creates on its own.

I phoned Google One support who claimed these label names are not created automatically by Gmail online.

I also asked the Google Gmail community forum and they reckon it’s some external mail client / mob app or rogue program creating this label name. We only use the Google Gmail app on our mobiles so carnt be the mob app issue and must be Emclient.

So we moved the old emails from those Gmail $X labels into where they should be via EMC and then deleted the folders via EMC, but the folder / labels came back again after a few days this time though with nothing in them.

So we then deleted the folders from Gmail (online) and so far they havent come back. I have never noticed these $X folder / labels before in previous versions of EMClient.

I agree with @Gary that it’s probably just caused by EMClient interpretation of some existing Gmail folder / label names and renaming them to the $X labels.

Might be a bug in the folder label reading / synching part of EMClient V8.

I also had the problem of the $label, $label1 , $label2 appearing.

Hi everyone,
the labels starting with $ symbol are not created by eM Client, these are Google’s internal labels and the bug is that we are accidentally showing them.
This should be fixed in upcoming updates and the $ labels will be hidden again as they are intended to be (which is why you will not see them in your Google webmail).