Been using EMC for several weeks and has been working well. Have made no changes to system recently, but starting today EMC opens with the message “Password required for you@gmail.com. This operation may take awhile to complete. Please be patient.” and then continuously displays without connecting to Gmail. If I choose “Cancel” I am bounced back to a Gmail login which then bounces me back to EMC with the same continuous “Password” message.

I’ve searched for solutions here and found some with a similar experience…I have uninstalled and reinstalled EMC…IMAP settings are set to port 993, and the security policy is set to Use SSL/TLS on special port (legacy)…but still can’t sync with Gmail account. Other suggestions much appreciated.

There may have been some issues with Google today.

I got these errors earlier that describe an authentication backend failure, but then an hour later they disappeared: 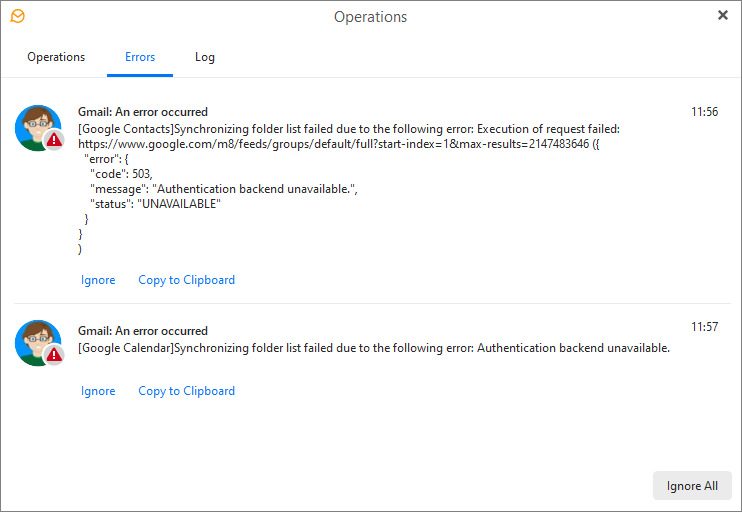 One online newspaper here in the UK reported: “Gmail and other Google services stopped working after a major outage for the technology giant on Monday. Google said the issue affected “a majority” of the 1.5 billion users of its email platform. Gmail users were greeted with a “Temporary Error” message, stating: “We’re sorry, but your account is temporarily unavailable.” “We’re aware of a problem with Gmail affecting a majority of users,” the message added, with the word “Gmail” later replaced with “services”.
Limited functionality returned after around 30 minutes, though users were still unable to access their contacts. It took a further 15 minutes for the service to be fully restored.”