emClient automatically adds nobody@invalid.invalid back into an email field in Contacts after I delete the words and save the record. This is not good behaviour and also looks terrible. Now, it is also possible that this is a “Display only” feature - that the record is intact as I intended, and someone is trying to be helpful by letting me know that there is no email address. Bad idea, if so. A blank field pretty much tells the story and looks much better!

I am a programmer of some 50 years experience. I have never seen this anywhere else. It really should be removed immediately.

emClient automatically adds nobody@invalid.invalid back into an email field in Contacts after I delete the words and save the record

What words are you deleting when this happens ?, and what Contact field does this happen in ?

Can you screenshot and example (of the before and after) when it changes to nobody@invalid.invalid and paste it in this thread.

It appears that if you leave a “Display as”, then the email address saved as blank is replaced by “Nobody@invalid@invlid” which is invalid behaviour. It is quite usual for business addresses to change - so you want the record with the “Display as” to save having to enter it later again. This is because (see my other topic) emClient does not handle “Display as” automatically.

I will have to post a second time because the system feels I am a newbie.

Condition of record after Save 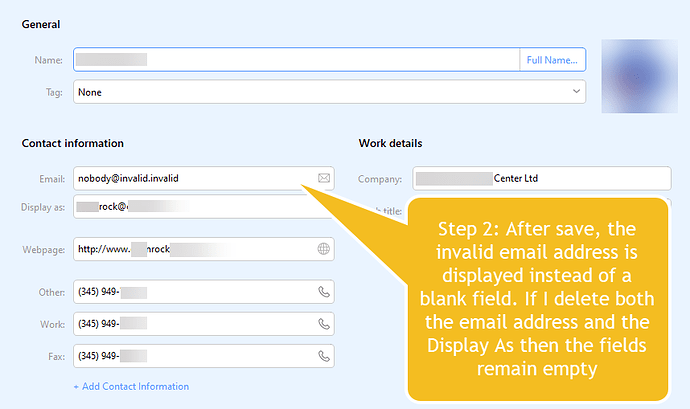 You are normally “meant to enter” a valid email address name (when creating contacts) as is designed, otherwise eM Client knows it’s invalid when you leave nothing so puts nobody@ etc.

What do you want eM Client to put in when the email address is blank ?

What do you want eM Client to put in when the email address is blank ?

Perhaps it makes more sense to NOT allow “Save & Close” if eMC detects a formatting issue.

This is a “Contacts” table - it serves both email and phone as well as address. It is logically AND/OR in the real world. As an example, WhatsApp or Signal is not really interested in an email address - but they love phone numbers. Mail merge for labels for Christmas cards is not interested in either email or phone, but is interested in name and address including company. I reiterate that this is a Contacts section.

Carrying this a bit further, there is no “Setting” to say “Automate Display As field”. If the person name is there use it, and if not, use Company. But thereafter, allow the user to then edit it if they wish to in the future. If I were writing it, I would make this a triple option setting: Use email / Use name / Use company.

Just my thoughts. Right now I am editing a huge import of contacts and not linking having to click on: 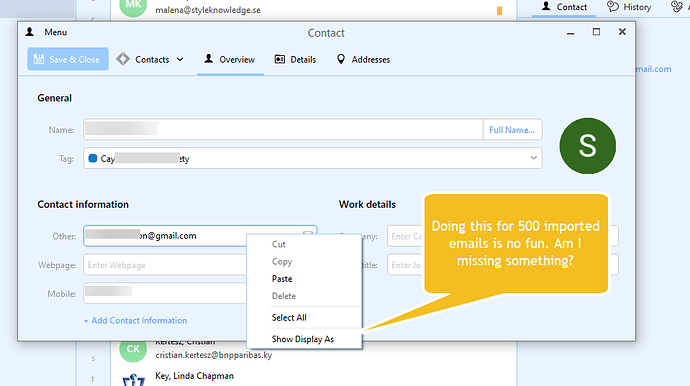