It appears that in a recent version update the “Apply Rule to Folder” functionality was re-written perhaps? I can explain how I use this feature and then what has happened, if that helps.

One of my companies has an e-commerce element. Customer orders generate emails which arrive and land in a folder in my inbox. I like to review them every few days to keep a pulse on what customers are doing. I click through 50 to 100 messages just to generally get the vibe and then, with these emails read, I have a rule that I always used to manually run on that specific folder which would file them away to another sub-folder elsewhere (and also mark them read in the process if I hadn’t felt like checking through all of them)

In the past, running that rule was a little delight for me… I would watch as sometimes as many as 100 messages all whizzed away in seconds, leaving things neat and clean and filed away properly. It never took more than 1 or 2 seconds.

Now, however, it takes 30+ seconds just to “prepare” to run the rule, then each individual message appears to take a second or two to get filed away as the rule executes. Since this locks focus with a pop-up window, I’m effectively blocked from using eM Client for a few minutes when I run this rule.

May I ask what has changed and if it could possibly be reverted back?

Oh lord… I now see that something MUCH stranger is afoot. Instead of moving the messages, the rule now somehow copies them to my inbox, and does so multiple times. I’ve now got three copies of all of these hundreds of customer emails all in my main inbox instead of the sub-folder.

The rule itself was not re-written. See attached here. What could be happening? 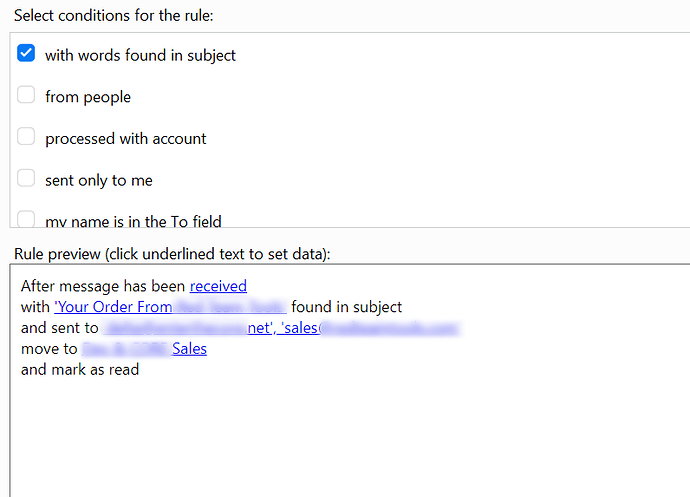 Update: so, i’m thankful that the de-duplicator tool works well.

It appears that the new “Apply Rule” functionality requires the user to un-check all other mail rules (otherwise eM Client appears to kind of freak out and try to run them all at once?)

The former version functionality had a nice drop-down menu that allowed you to select the one rule you wanted to execute. I guess some folk wanted a means to run multiple rules at once on command? I could see that.

At least now I know that it’s not merely highlighting or selecting the rule i’m interested in… it’s manually un-checking all the others which will get me the effect I seek.

Well… running rules seems to execute as intended now (when I uncheck all the other rules first) but it’s still massively slower than it used to be before this change.

Check that you are only applying it to one folder. If it is being manually applied to all folders, it will take some time.

Just the one folder. Which contains no sub-folders.