But installing the Store app results in second installation - and it doesn’t recognize my license.

How should this be resolved? Additionally, I’m trying to use the Beta 9 for my default mail application which means I’d prefer a non-app solution.

Are all the options set to eM Client? 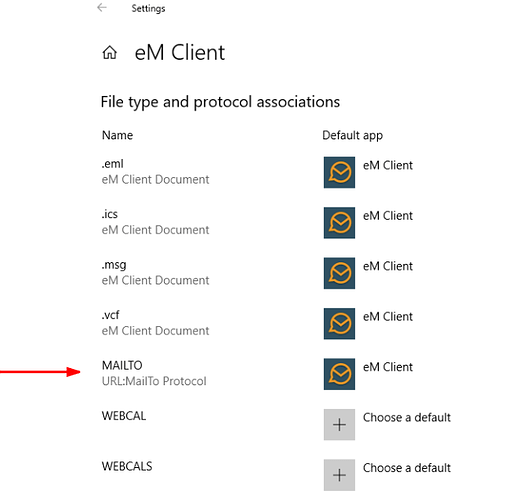 Please install the desktop version of eM Client.
Then restart Windows and try again.
You can ignore the webcal options.

Also, the Pro license will not work with the MS Store version, which is a monthly subscription service you will need to purchase through Microsoft.

I have the desktop version installed. Repeatedly. I have re-installed Windows. Repeatedly.

So I’ll ask again - how can I set eM as the handler for MAILTO, WEBCAL, and WEBCALS?

how can I set eM as the handler for MAILTO, WEBCAL, and WEBCALS?

You click “Choose a default” on the right of those options as in @Gary screenshot example.

For EMail under default apps, the option is presently blank. Selecting it only gives me the option to “Look for an app in the Microsoft Store”.

By applying some registry fixes I’ve been able to resolve this. The following, when saved to a registry file, then merged, followed by a reboot - should allow the mailto to be changed, eM set as the default Windoze mail client, and also allow for setting the mail handler in browsers such as Firefox.

No guarantees as I’m not certified anything - but this worked for me. I think.

If your installation is somewhere other than “C:\Program Files (x86)\em Client” adjust accordingly.

Welldone sorting all that out in the Registry.

Sounds like the Windows Store version doesn’t associate everything right in the registry after install.

I also found even with the eM Client direct download from the website, the WEBCAL, and WEBCALS are not associated in Windows 11 and also only had option in settings defaults to open the Windows Store as well to find an app. Yet when i checked my registry they were already associated to eM Client.

eM Client was available for me to select in MAILTO GUI via the default apps in Win 11 for the direct download from the website. So must just be the Windows Store version that doesn’t seem to enable the MAILTO option in the GUI.

Somehow I’m not being understood. This go-around - I’ve only installed the downloaded version. I’ve not installed the Store app at all. That’s the problem - the Store app properly? provides the Windoze linkages needed while the downloaded version doesn’t. Or at least - several of my previous attempts didn’t and based on other comments on this forum it appears to be not uncommon.

I recognize that Windoze 10+ blocks some 3rd-party registry changes as part of its “security” but it would be nice to have a researched and tested solution available - something similar to what I posted - that could be endorsed by eM and provided as a solution. The fact that the settings are unavailable in Windows 10+ means for whatever reason the registry wasn’t set correctly - so a tool should be provided to do so. It’s not complicated - if there are registry settings that are supposed to be set by the installer to provide a fully functional setup - just copy those same settings to a .reg file and post it.

So I think then you must have had a registry issue anyway being eM Client wasn’t available in MAILTO options as mine was in Win 10 and Win 11.

The WEBCAL and WEBCALS were not available" as I wrote above to choose any email client for me in the normal set defaults GUI as they are normally (I guess only for web based app stuff) and not usually for locally installed mailer clients from what I can tell. So I don’t think eM Client Devs would normally need to automatically associate those to types in Windows. I could be wrong though. Dunno.

@Gary Should eM Client be available to select as an eM Client default in the normal Windows GUI set defaults for WEBCAL and WEBCALS ?

That might have something to do with your OS.

MAILTO should at least offer your browser(s) and Windows Mail as options without having to look in the store.