Mail is displaying high ascii characters instead of text

I sent you this message: 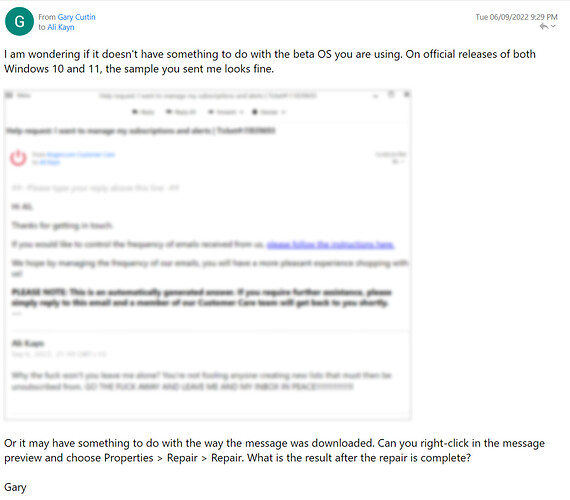 To which you replied:

But you never said if you tried the repair.

You understand that your messages are coming to me in that ASCII salad? And that something down at the bottom of a thread is not visible?
And now that you have pointed it out, there is no repair option. 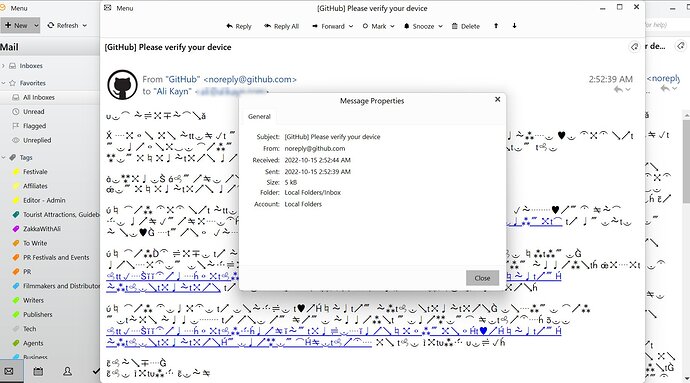 Other people have started sending me examples of the messages they are receiving adding to the congestion in emClient. Today I wrote 0 words. It was 14 hours of tech support and trawling the web looking for possible fixes for bugs and design flaws, which generate more messages in this salad. This has become extremely distressing, and dangerous as it affects my medical treatment.

This is a SEVERE problem. I can’t print incoming press releases to PDF as the text is useless for future reference. The repair option is not available for any mail in local folders (another user gave me this feedback). Others are resigned to the mess, but it is causing me all sorts of issues in my daily workflow because I have to hit ‘forward’ to read the mail, and I have no preview to quickly prioritise my work. If the problem is ever fixed I will have to go back through weeks of work to find material that should have been archived.

As you can see, the printed copy doesn’t display the e-mail address correctly. A key piece of information.

I am not the only person with this problem. Everyone else I know who has emClient has this problem, just not with my volumetrics. They are all resigned to waiting for you to fix it.

IT IS NOT OS. You have not responded, that I can tell, to the fact that people using different OS, different apps, with only emClient in common have the same problem. 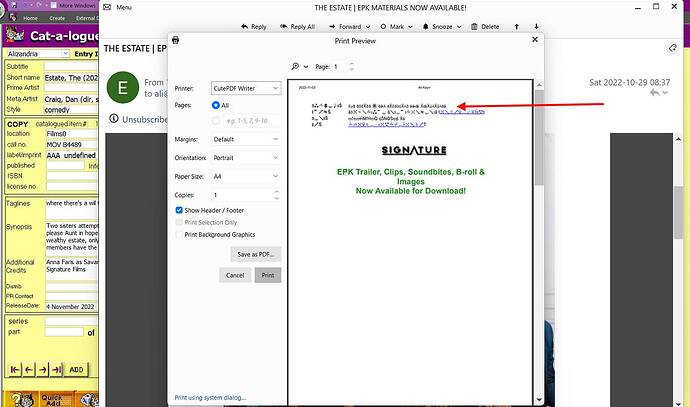 I am extremely concerned on behalf of all the users that I know have this problem that you are not addressing it. As you know ‘repair’ is not available for any mail that is in a local folder. With this constant error emClient is no longer the premium email client.

You don’t seem to have replied to the fact that there is no REPAIR option on these messages.

Who are all these users that you know have this issue?
I am interested to compare their issues with the issue that you have, perhaps it will be a good idea for you to ask them to post their issues here.

I reviewed emClient and recommended it to people who wrote for me, plus the usual circle of support people. When queried they are having the same problems or have revlocked machines. I have received a couple of samples, but they are deep in the bowels of my mail, which as you can tell is extremely stressful to try to deal with. My volumetrics as a journalist are much more extreme with media releases for software, hardware and the daily blasts for movies, streaming services content, etc. (I used to go through a roll of fax paper about every 10 days and get my mail in a mail bag before e-mail became the rule). As mentioned above, my housemate is using 9.0 not 9.1, and he uses the end-user releases of Win 11 whereas I use Win 11 Insider releases. Except for being on the same LAN we have no software or hardware in common. Everyone else is less precise except, of course, they refer to ‘my’ emClient.

It may not be relevant, but the only other app having (unrelated?) issues is NoteTab Pro and we hit a wall because the fix was to use Latin (World) and that is not available in Windows 11.

Yes, I don’t know if it’s relevant, and I think I’m the only one in this instance, but I’m running multiple languages - Aus English, UK English, US English, .Francais (Fr), Spanish (Sp) and I am currently installing Lingua Latin to see if that will fix my NoteTab problems which are code page based.

Come to think about it, we are all using Aus English because MS locks the currency formats into the language. I use UK English dictionaries to prevent swapping between “ise” and “ize”, I use US English because it is required for US clients, and the Fr and Sp are self-explanatory, you probably have them loaded yourself. Or you might use the LA version, I guess.

I am still struggling not being able to red e-mails, why do are the messages garbled when I read them, or in the preview pane, but legible if I hit forward or reply? No one else is willing to waste time complaining, they are assuming that you will fix it if they wait. I am under a lot of pressure and this is causing severe problems. I transferred my db to another machine. I had to install 9.2. Same problem on a completely different machine running a basic Windows 11 Home.installation.

Is this only happening to Australian users?

I have made the time to setup a system that as far as I can determine matches the system you are using in terms of the OS and various languages that you use; I also have a work around for Latin. Further I am aware of Australian users - none of us have been able to simulate the issues that you have. As far as the examples you have “deep in the bowels” - a simple search would find them to enable other investigation.
I actually believe that your issue is nothing to do with eMC and is being caused by something you are doing or something on your system.
Many years ago before moving to sciences, I studied languages and classics which included Greek & Latin, so in conclusion… “Quisquiliae ingreditur et quisquilias exeat”

I agree with @Gary and @skybat that this issue is “not eM Client related” and is either eg: “some sending mail server related issue” that is either corrupting the message in someway “before you receive it” or “corrupting it in someway when passing through another external mail server along the way to your mail server” or “some sort of external program is installed on your system” is interfering with eM Client and modifying your emails to display like that with garbled asci characters.

As @Gary advised you can normally try repairing the message which sometimes can fix it with problems in the actual message itself, by “right clicking” in the “message header area” and click “properties on the dropdown menu”. Then “click Repair at the top”.

Note: You won’t see the repair option if you click properties in the body of the email. So Right click your mouse eg: (just to the right of the sender’s name) in the blank area of the email header.

If the repair makes no difference, the only other thing I could possibly think of is that the eg: Sender’s Mail application "composing the emails is (non standard html) in some way so then eM Client then cannot read it and so only shows you garbage asci type characters. So would need to know what mail client they are using to test that with eM Client.

The only issue I ever heard of in the past was eg: with some sender’s composing with Mac Mail where Mac Mail had a special way they created html emails (different than all other html mail clients), but I believe eM Client has now been updated to support that difference, as I haven’t heard of issues with Mac Mail sending to eM Client for sometime.

I personally currently use eM Client with Windows 10 & 11 (22H2) Home editions and Mac (Monterey) receiving mail with eM Client V9.2.1222 and no issues on either OS.

If the file was corrupted, surely it would never look ok? The affected messages are garbage in the read pane, the preview pane, and print preview. Hit reply or forward and the included message is ok. The messages from gmail and my mail server are both affected.

I posted an image above, but to confirm, it would appear that messages in local folders cannot be repaired. 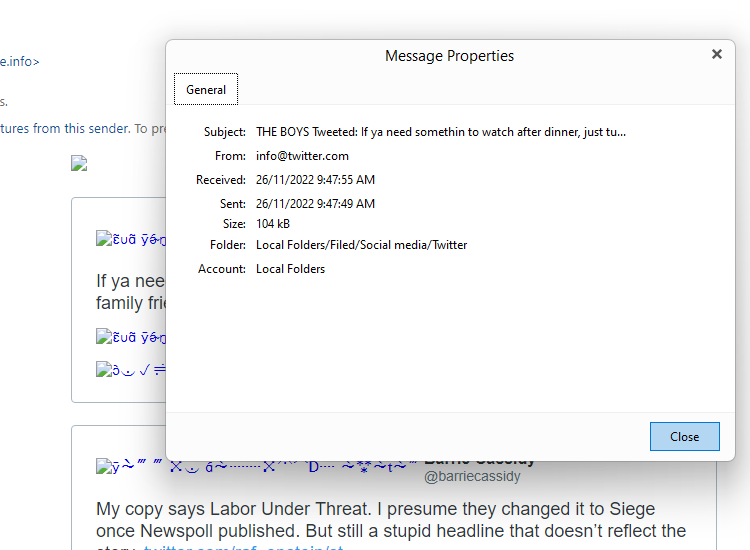 In some instances, such as the update from twitter, hitting download images clears the text, but not in all cases.

If the file was corrupted, surely it would never look ok?

I’ve personally had many emails over the years that look ok in “many different mail clients” including Outlook, but they have still been corrupted after inspecting them closely via source code. So looks can be deceiving.

If it’s not corrupted then as I said above “it could be some email compatibility with the sender’s mail program” they are using, and would need to know what they are using to test with eM Client.

So contact the sender and find out what email client or email program the sender uses for these specific emails you receive & update in this thread for forum users and devs to test.

I’m sharing the house with Ali and I’ve had a look at her emails from her machine.
It is currently running Windows Home Version 22H2, it’s a fresh build and the high ascii characters are still appearing.
The suggestion of clicking on Properties in the preview pane and then doing a repair does not work when the message is in a Local Folder, the Repair option is not there.
The repair option is available when looking at the message on the account side, but even there it didn’t appear to do anything.
The frustrating part is that when an email is replied to or forwarded, it comes out in clear text!
Hope this helps.
Edit:
Looks like it was a font issue. Changed from Bookshelf to Segoe UI and things appear to have cleared up. Only time will tell.
However, she was using a suggested font that came from “here”.

I posted an image above, but to confirm, it would appear that messages in local folders cannot be repaired

That is strange the message Properties/ Repair option is not available in Local folders.

Is that from a POP account where your emails / messages go straight into local folders ?,

Or have you dragged eg: IMAP, Exchange or iCloud messages into a local folder ?

Looks like it was a font issue. Changed from Bookshelf to Segoe UI and things appear to have cleared up.

That’s good news you resolved it with that font change. Bookshelf sounds like a weird non standard font. I’ve personally never used that before. Hopefully that font change will work for you too @Festivali .

It’s not something I could see on my pc, but it was an available font on hers.
I took a punt and changed hers to the same as mine and things cleared up.
Hopefully it stays

I asked to stop the bolding of unread messages and support told me no, and that I should experiment with other fonts. It appears that some parts of emClient (only some) have problems with some fonts. Still an app problem though, because otherwise it would be consistent.

Still an app problem though, because otherwise it would be consistent.

No, not an eM Client issue. It is just the font you have selected. Bookshelf doesn’t have regular alphabet letters. So for example, your post above looks like this in Bookshelf: 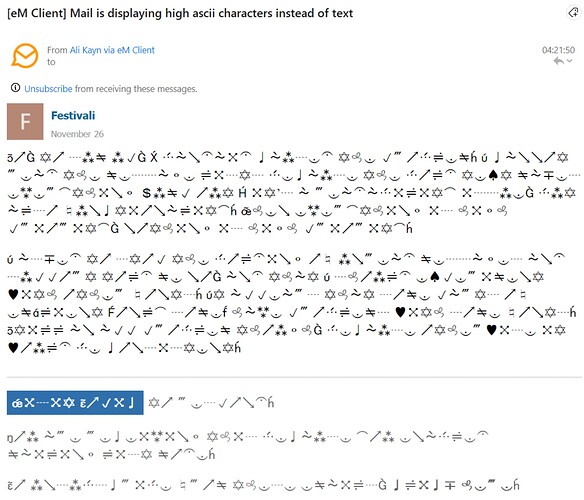 Maybe you also changed the font for the lists.

Go to Menu > Settings > Appearance > Lists and set the font for “Item lists font” back to Segoe UI Regular.