Just updated to 9.1.2109 and the client doesn't start anymore

Hi guys!
I just updated my client to release 9.1.2109 (from the emclient itself).
After the update eM Client doesn’t start anymore.

I restarted Windows 11, downloaded em Client and repaired but nothing.

Similar problem after update but it starts but will not send or receive mail? Have to wonder why updates that cause the program to stop working?

I followed your instructions and re installed the program version 9.1.2109 but same problem. It will not send or receive any e mails. all the previous folders and archives are still available but when refreshing to get/receive or send new mail the icon spins but nothing gets received?

I am still not able to send or receive mail. I have followed the uninstall/re install procedure and not resolving issue. I am really desperate to start getting e mail again. Can you help or do I have to buy a new version?
Thanks

Gave up on eM client. Never do a update again. Have lost , not received important multiple mails etc. so back to Yahoo

Crazy free stuff !! No support and the one procedure I followed from this thread didnt work.

Hi, having a very similar problem with one of my clients where eM Client will not start using a normal shortcut (or manually running MailClient.exe). It WILL run using “run as administrator”, but when screen appears all messages showing OK but will not open.
Have tried repairing using original version, then latest version (9.1.2109).
Followed Gary’s instructions as shown, uninstalled the program and reinstalled using version from displayed link (ie 9.1.2109 msi download). Same problem.
Tried a complete uninstall, cleaned up ALL folders and files, then reinstalled from scratch using new database etc. Loads messages from server OK but still will not open or display them!
If you try to open a message it just sits and has a dotted line scrolling across the top of page.
Have tried POP account as well as IMAP, no difference.
Only other clue I have is that when program installs, at finish screen it shows ticks in three areas (set as default client, open eM Client etc), but pressing FINISH does not seem to do anything (I guess it may be trying to open app but gets same error as when trying to open using shortcut).
Any ideas please?
System is Windows 10.

Only other clue I have is that when program installs, at finish screen it shows ticks in three areas (set as default client, open eM Client etc), but pressing FINISH does not seem to do anything (I guess it may be trying to open app but gets same error as when trying to open using shortcut).

Don’t know if this will help you?
As a general rule we never run an update with a program running, in fact many say to close before continuing.
Also at end of install we never allow the process to re-start (the three ticks you see should be unticked) a program, we shut down install process, reboot system and then restart a program - not just eMC all updates.
We have never had an issue when applying an update to eMC in both Win10 & Win11 using IMAP & POP, or subsequent connection issues. ( we use a 2FA work around for POP)
Have you tried running SFC /Scannow? You can do this from an elevated Command Prompt.

Thanks for the info. We have now resolved the issue. The latest 22/08 update 21H1 (KB5016688) had not been run on the machine. We closed eM Client, installed the windows update then restarted the machine. eMClient opened properly (from the shortcut) and messages are now showing properly.

I’ve just applied the “repair” to eM Client but at the end after getting the Congratulations webpage, I get the following message: 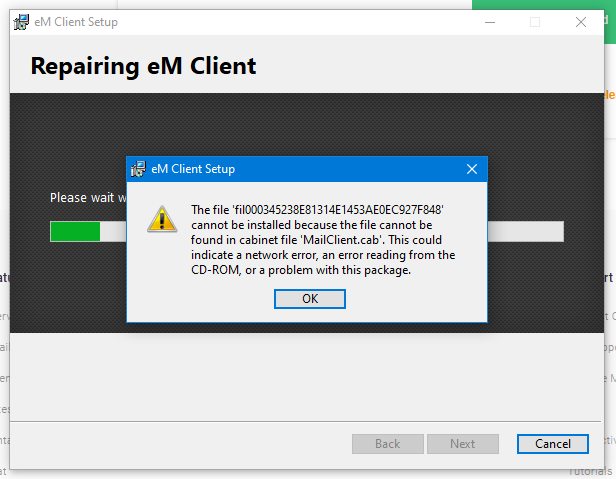 ME TOO !!
Beware of uninstalling eMClient. I did on the last update earlier this year and lost 8 years of emails etc.
Following advice from the experts of, “Menu> File> Restore”, I then lost all the recent emails !!
(Still waiting for a reply to my question, “Is there any way to convert into English the DAT folders that hold my emails in the many backups that I have made ?”)

Thanks but really leery of doing anything and as eM client is free cant complain other than it no longer works and trying everything mentioned on this forum still doesn’t work? Would be happy to pay for something that works but not eM client as I think to just give up on it

Further to my problem I reported last night.

I have re-downloaded the update file: emclient-v9.1.2109.msi

I have run the re-downloaded msi file.

I still get the error message shown above. I clicked OK and then Cancel. The ‘repair’ reports that the update has not been installed.

I can still run emClient and it seems to run OK. Certainly it downloads my emails OK and seems to send emails.

However, when I check via Help>About which version it thinks it is, it reports: 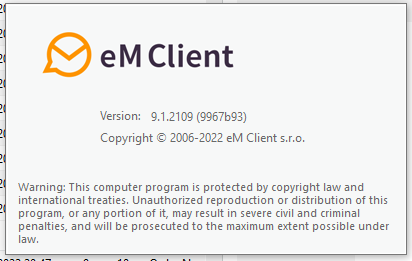 Which version am I running? How can I check another way? Since I don’t really want or need the updates highlighted on your new features web page, I don’t care too much about the new functionality. What does concern me is “Can I receive and send emails from my accounts as I have done before now?”

I’m not sure what these guys are up to, but our copy has stopped working again. We received an email from sales dept saying there was a new version available and we could “relax” with 9.1. It’s nothing but a crock. Update just didn’t work, then total uninstall and reinstall hasn’t been successful either. Will not keep server & port settings, tries to change them. Receives OK sometimes but will not receive. When messages open we get messages about Mail Chimp, Litmus, Salesforce and other packages we do not use or recognise.
After several days and countless hours of messing around we have installed Mozilla Thunderbird and it works perfectly! Such a shame because the eM Client package has been very good for several years.

Which version am I running?