Is it possible to have emails not open in a pop up window but open inline?

I love the product but hate how emails open in new windows. I’ve scoured the settings, this forum and internet searches and haven’t been able to find anything on how to open messages inline rather than a pop-up. Can anyone point me in the right direction?

If you select Menu > View > Layout > Messages on the Right, then the messages will open in a pane on the right of the message list.

Look at your layout settings. Select one of the “message on the …” options.

Thanks Stephen and Gary, but that is only for viewing the email. I want to respond inline, not have a new window open when I hit reply. I have messages on the right and replies still open in a new window. How do I operate in one window and not have responses open up in new windows?

Sorry Ryan, that is not possible.

That is extremely unfortunate. The product meets all other needs, but this is going to stop me from rolling this out to my dev team and not purchasing the paid version

Is there a Windows email client out there that can do that?

Outlook provides that as an option, but trying to move the team away from Microsoft

It has been a long time since I used Outlook. Guess things have changed.

In the new update, have you implemented this feature @support em client?

The way eM Client works is that by default new messages are opened in the preview pane, not in a separate window.  The OP’s question was answered.

I would also be very happy if you can write a reply inline (so that no new window opens for the email editor). This way you could work completely in one window. I love this idea.

As mentioned before, Outlook has been offering this functionality for a couple of years, and it’s really nice because it keeps the desktop clean.You can even move the main window around and the opened email (inline) will follow.

On the other side, opening editor panel as tabs would be much easier to implement and it would provide the same advantages (single window working).

Since this concept is well known by web-browsers or even text-editors, I vote for the introduction of tabs that can host editor panels.

Inline edit would make it easier to convince others to switch from Outlook to eM Client as this is the default way it is in Outlook and the users are used to it.
I personally would not use it though.

I might be interested in the tab attempt instead.
But not as tabs in the main window.
Instead it would be cool to be able to combine multiple editor windows into one window with tabs.
So that I would have only 2 instead of 4 windows open then when I am writing 3 emails in parallel.
1 main window and 1 editor window with 3 tabs.

So, I like the idea with the tabs better and better. Especially if you have a multi-monitor setup, it’s very nice to have only one eM Client window that you can move around (instead of various windows). This behaviour becomes more and more important regarding modern touch devices (running Win 10 like Surface Pro). You definitely don’t want to organize multiple windows with your fingers.

The folder navigation panel (on the left) would always be visible but on the right you could then create multiple tabs to organize the content. These tabs are independent and actually allow parallel work in all areas.

For example, you can open two emails or work on two calendar appointments at the same time. In addition, you could “pin” individual tabs, so that the content is permanently preserved. You even could click the ‘plus’ button in the calendar and open two different weeks (each in a separate tab).

Here are small mockups of how this would look like: 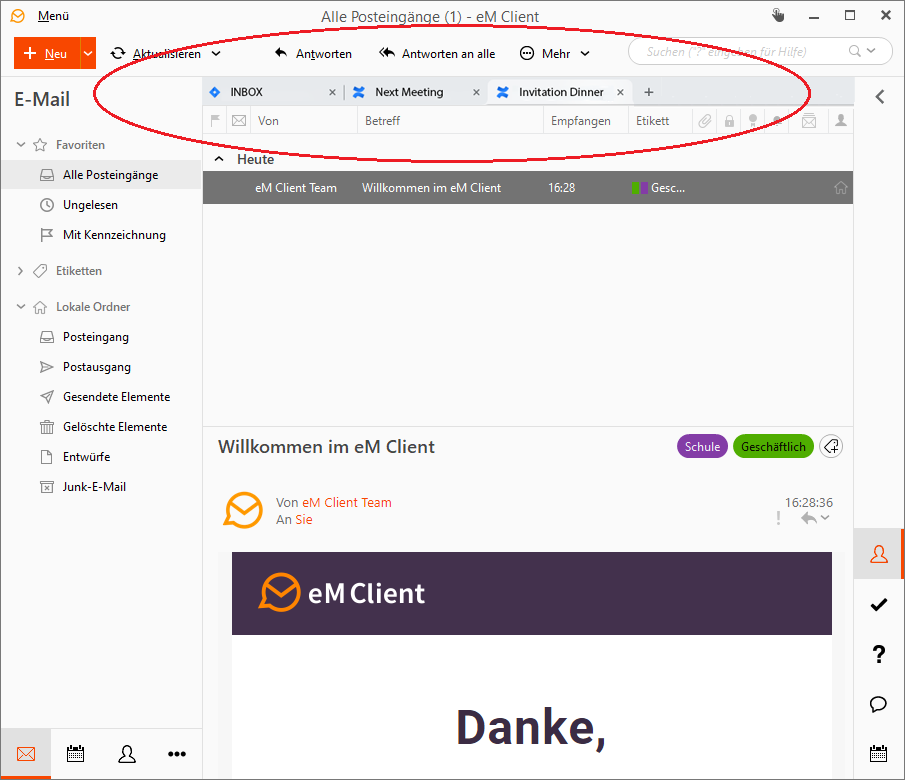 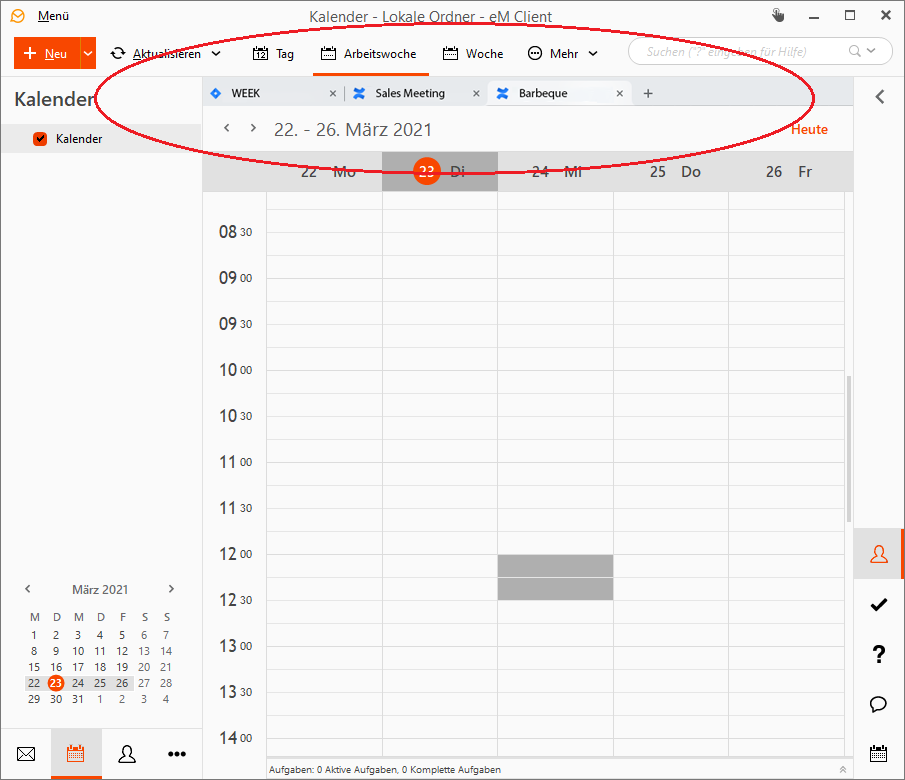