How to make Rules work

I am very new with EM Client and have quickly seen that there seems to be a long standing issue with making rules work. My situation is simple One email address and one rule to identify one particular word in the subject when the message is received, and then place that email in a particular folder. I cant seem to get this to work. Any suggestions ? Thanks…Ponder

Can you grab a screenshot of the rule and display it here?

Yes, can do…be back in a few hours and will send a screen…Thanks … 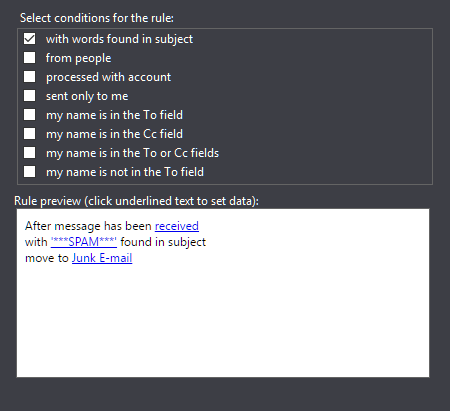 Not sure if this worked or not…

It will work as long as the message arrives unread in your Inbox with those characters in the subject.

If there is a server-side filter changing the subject or moving it to another folder, or the message is being read on another device, eM Client’s Rule will not affect it.

Where are those “SPAM” messages ending up?

Is the server changing the subject? If it is then eM Client Rules cannot apply automatically.

Can’t you have the server move the messages to spam?

Can you give us a screenshot of the SUBJECT line as it sits in your inbox?

Hi Gary…Interesting idea but don’t see how that can happen…but will ask…I think Spam assassin reads all messages and id’s spam in the subject, then server sends them to me some with the subject altered…BUT another choice with spam assassin is to have the spams put into a “Spam Box” and not sent to me…but that spam box requires me to sign into the server and then sign into the spam box to see the messages so I can be sure I am not missing something…a long way around to check things…

I have run a test on an email with the SPAM subject line and sending it to my Junk E-mail folder… works as it was directed.

Some strange stuff being conveyed… Are you running the latest version of eMC?

Good Advice again…I was not using most up to date…not sure how or why…so uninstalled and re-installed and see a major difference in the look & feel, set up the rule for Spam etc, and all started to work perfectly…went overnight and everything is just as it should be…perfect…All my thanks to you and to Gary for sticking with me on this…it’s 100% solved…Thank you very much…