Failure to save copy of email in sent folder

Since the upgrade to v8 (which had it’s own set of problems), NONE of the emails I send with emClient save a copy to the sent folder, despite the option definitely being selected.

There are numerous different threads here of people with the same issue, none of which appear to have been fixed, or the the threads have just been abandoned, presumably due to users moving away from emclient after getting the stock standard (and of no use) instructions.
Saving a copy of a sent email to the Sent folder is a pretty basic function for an email program, so I really don’t understand how this still hasn’t been addressed.

Sol I’m adding to the list in the hope that it may finally be fixed to avoid having to move away from emclient as I like it otherwise.

Again, this is NOT a new issue - it’s been around since the upgrade. For me it only came to light when I went searching for sent emails and realised that none sent from emclient had been saved. All other email applications do it just fine, as did emclient v7

My setup may be a little different than others as I use google (configured as imap - NOT as gmail since that stops me from being able to specify an smtp server).
Both incoming and outgoing mail are sent/received just fine - it’s JUST the complete failure to save sent mail to the “Sent” folder that’s the issue. This EXACT same setup works fine with all other email apps, including emclient v7.

The option to “Save copy of sent messages to Sent folder” IS selected but still fails to work. Heck, even if I could save a copy to the LOCAL folder and then manually move it over to my gmail folder, I’d be ok with that.

Running emClient Pro btw. Windows; v 8.2.1473, although this has been an issue since v8 upgrade (although it took some time and probably hundreds of lost sent emails before I actually noticed and stopped thionking I was going crazy)

You make some assumptions that I don’t agree with, however, the first thing you should do is to move to the latest version of eMC.

Test to see if this helps.

Thanks for the quick response…

Not too sure what the assumptions are that you’re talking about as I only made 2 (saving item to sent folder being a basic function that any email program should be able to manage without issue - which I think would be hard to dispute; and that the multiple people with this issue around saving sent mail have moved away from emclient, which, while is indeed an assumption, is based on there being no mention of “Great, working now” on any of the posts so not exactly a huge leap to make)…

Anyway, onto the actual issue…

So - after having just checked in-app yet again (No update), I just checked the website in case it was another instance of this delay… But the version that downloads from emclient website is the exact same version that I mentioned I was running in my initial post - v8.2.1473.

OK, maybe there is a language difference.
I have no idea where you are looking for eMC software versions - if you follow the link in my previous post it will show immediately in view at the top of the list: ver 8.2.1509.0 and not as you state ver 8.2.1473.0
Please try again.

I just checked the website in case it was another instance of this delay… But the version that downloads from emclient website is the exact same version that I mentioned I was running in my initial post - v8.2.1473.

Please check the Release History for the latest versions.

Ok - Yep, I was downloading from the main emclient.com page, and that definitely downloads the version I already have (v 8.2.1473), which also seems to he the “latest” version reported by the in-app updater.

The release history does indeed have a later version (by 4 months) - which seems odd, but ok…

Downloaded v 8.2.1509 from the release history page and installed.
Tested by sending 2 separate emails - result as expected, with nothing saved to Sent folder (emails were sent successfully though, and confirmed as received on other accounts. Other accounts are entirely separate/unrelated to the account used in emclient, and are NOT accessed via emclient)

Happy to try any other suggestions/perform debugging…

What you need to do is create a Rule to move messages after sending to the Gmail Sent folder. 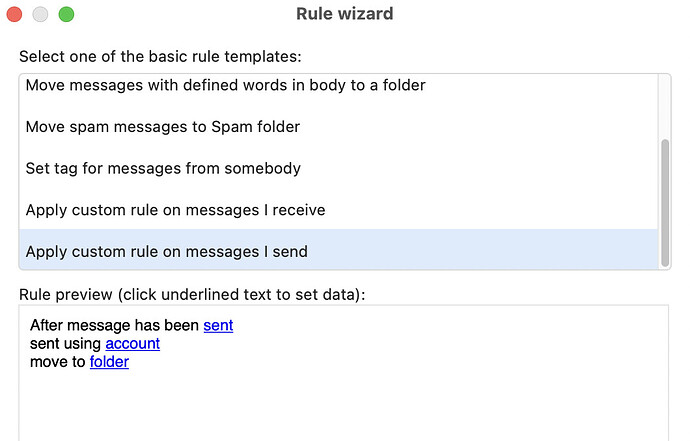 Sent using account is the Gmail account, because that is where you specified the alternative SMTP service. This is just so if you have other accounts, it does not move all sent messages to Google.

Ahh fantastic… After adding the rule per instructions, I sent a test email and finally have a copy of it saved in my Sent folder… Thanks very much for that.

Before doing that, I also manually checked the Sent folder of the relevant SMTP account, but it’s empty… In fact there’s nothing at all in that account (as I’d expect based on the account ONLY being used for outgoing mail, especially since no other email programs that I’ve used - including prior versions of emclient have ever followed your logic of saving the sent mail to to smtp server, however much it does make sense that should be where it’s saved after reading your explanation) - so I’m not too sure about that part…

But at least with the rule added, any NEW emails sent are at least saving to the Sent folder.

I acknowledge that my setup may not be the norm, but since the Sent mail (prior to rule being created) doesn’t appear to have saved anywhere, whether on the IMAP server or the SMTP one, despite the option to save to Sent folder being enabled, perhaps some kind of alert/error would be useful when this process fails for whatever reason.

Just wanted to let you know this helped me a lot, thank you!!