Hi,
I’ve found a another error with the french translation.

I copy a screenshots with the good correction

Also, as you see a lot of empty spaces ?
(Just at the end “annuler la sonnerie”)
I guess the options are there but not translated maybe ?

Have a good day

Bonjour!
This issue has been fixed in later versions, as you can see in the scrrenshot below. You should consider upgrading your version. 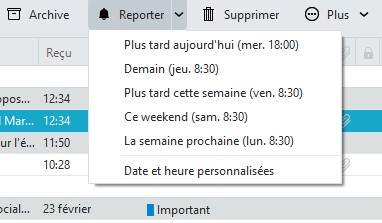 Have I miss something ?

Re;
indeed it works via the main menu but not if I open the email in a separate window (see my screenshot in previous message)

Sorry I didn’t notice it wasn’t uploaded yet. Here it is:
https://www.emclient.com/dist/v8.1.1087/setup.msi

The menus work in both windows, however, the word “Repousser” is still present in one of them.

I’ve updated to build 1087 but the problem is not solved.

When I open the mail and I push to Plus, the translation is incorrect and the choice (menu) is empty 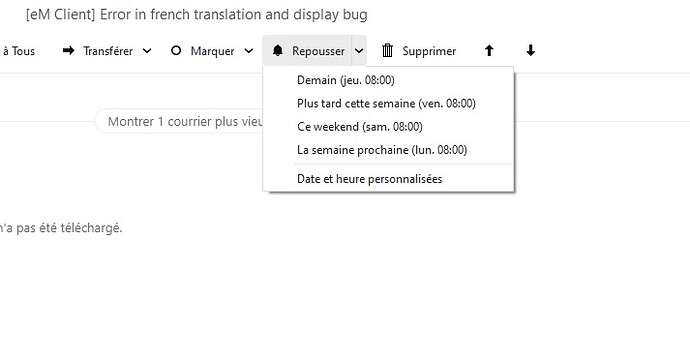 After that I return to normal mode and I push again to plus, the translation is still incorrect and the menu is there but with the first line empty !

The translation is never good but also sometimes the menu is visible or not ?!
I think its not just a problem with translation, it’s more deeper

Sorry I made you upgrade your version for nothing.

Beside the fact that the word “Repousser” hasn’t been translated to your liking in one menu, it seems clear to me that the Snooze menu issue has nothing to do with translation (I tried all tests below in both languages: French and English). It’s clearly a bug. I’ve been able to reproduce your issue and even pushed the analysis further and noticed some unusual display behavior and a lack of uniformity.

What I’ve noticed is that the Snooze menu is different depending on the way you read/open your email AND the size of the display window.

It shouldn’t be that way. I’ll be waiting for veterans opinions on this forum (to call a few: @Gary, @sunriseal, and @eisbaer) before clearly stating this issue as a bug and reporting it to the technical staff. I’ve included some screenshots below. It’s getting late here so maybe I’m getting all this wrong.

BTW, the blank line (the first one in the menu) in your last screenshot should read “Plus tard aujourd’hui" (Later today).

It’s a five-case scenario and I don’t understand the logic behind it:

Sorry for the rollercoaster.

Could the presence of the “later today” menu entry depend on the time of the day? It’s now early in the morning here in central Europe, and I can only confirm your 5th case: empty menu when both windows are minimised. In all other cases, I can see the “later today” entry, and the suggested time is 12 hours later. So if you took your screenshots during the evening (was it 8:30 pm?) the “later today” entry is not really meaningful; in your case 2, it is shown without any time, so maybe it should not be visible there at all.

I hope I am not adding to the confusion.

@Son-of-A-Gun no worries, it’s always a good think to have the latest version

The last time it was @Michal_Burger corrected the problem with translation.

@eisbaer it’s not a problem with the time but only with the size of the window.

Thank you @eisbaer. I can confirm your observation as well, I’m only able to reproduce case no. 5 now that it’s morning here. “Later today” seems to mean “12 hours later today”. And yes, I did my testings yesterday around 8:30 pm.
This doesn’t explain however why the Snooze menu is different on afternoons and evenings depending on the size of the windows and on how you open your email.