This is regarding an issue when I click on ALL INBOXES in eM Client OR Inbox for my main email account.

In eM Client I noticed that it will show the latest message of a thread with a message count i.e. 4 and a downward-facing arrowhead. However when click on the arrowhead I wind up seeing 4 copies of a reply to the top most message followed by a reply from the other person followed by a reply of mine and a copy of the same reply right after. What on earth is going on here? 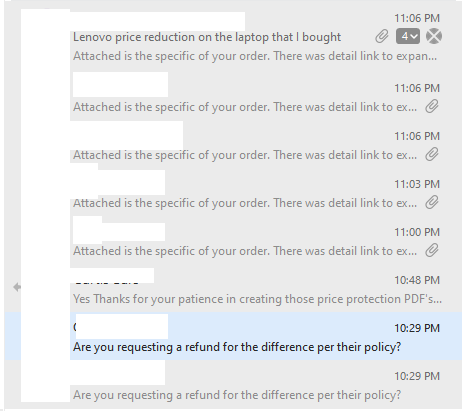 This has me concerned. I noticed that on this IMAP account the drafts folder in eM Client shows that there is 1 unread message, a reply I had composed in this thread. It is the “Attached is the specific of your order” one… That particular message in the Drafts folder does NOT show up in another email client nor does it show up if I login to the webmail interface for that particular IMAP client. I did a refresh and a repair on the Draft folder with no effect. This particular email in the draft folder is also threaded and shows the number 6 with a downward-facing arrow.
.
Expanding that shows a reply from the other person followed by 4 copies of the identical message (a reply from me) followed by a reply from the other person. That is followed by 2 identical messages which is a reply from me. The last message is the original message from the other person. Even though the collapsed thread indicated there were 6 messages involved eM Client is actually displaying 9 messages when the thread is expanded and this is in the Drafts folder.

If I collapse this list of messages in the Draft folder so that the only one that is visible is my last reply and right mouse and click delete I get a confirmation “Are you sure you want to delete selected emails” I click on YES the result is that I still see an unread message indicator saying there is 1 unread message in the drafts folder. I look and there is still a threaded series of messages with an indicator that there are 2 messages and a downward-facing arrow. I expand that thread and see the actual back and forth of emails in the conversation and there are NO duplicated emails!

What on earth is eM Client doing? I have concerns about switching over this email client from Thunderbird. Thunderbird has its quirks but I have never seen duplicated emails or emails in the drafts folder that do not show up in the webmail view.

By the way, these remaining messages in the Draft folder can not be deleted. Nor can the 1 in the folder list for the Drafts folder.