I write e-mails in different languages. And I found myself changing the spell checker language all the time between e-mails.

Would it be possible to provide a button that could be added to the sending message toolbar, for a quick change in the spell check language?

I would find this very useful as well! And I imagine it would be a relatively easy to allow users to add language shortcut buttons to their menus (auto-detect language would be even better, but more complicated to set up).

I think because you can do that by right-click anyway, there is no need for an additional button. I see eM Client’s interface as fairly minimalist, and adding a slew of buttons will change that aesthetic. Just my opinion.

The button would be totally optional and would be off by default: most people wouldn’t add it. But I think it would be good to offer people the choice. I switch languages almost every other email, and having to go through a right-click menu to do so is not efficient.

It is more than overdue that emClient at least allows to quickly change the spellchecker language (not with the keyboards – most people keep the native keyboard layout, even when writing in other languages!)
Better – and not really hard to implement – would be to automatically detect the used language.
It shows that the programmers from emClient do not use other languages. If they would need to switch the spellchecker language for every second e-mail (like I and others have to), this feature would be implemented the day before yesterday!

Thanks for posting the EXACT SAME post 4 times on this forum!

The other three can be found at:

Why would you do that?

But anyway, I think you may be wrong about the developers of this application Nick. As far as I know they are mostly in Czech Republic.

Oh, and you  can change the language without the keyboard, as I mentioned above.

Because different people posted that in different locations and this is the answer to each relevant post. And it is very relevant, because your suggested method is not quick, like it has to be when you are writing really many e-mails per day in different languages. It is just not efficient and the single reason why others and myself are not happy with the program. At least a keyboard shortcut to quickly change or toggle between the relevant languages would be extremely easy to implement. In the same time one discussed about if that feature makes sense it is already implemented!

If two mouse clicks are not quick enough and you are not happy with the application, the obvious solution is . . . . don’t use it.

Nick, there must be something out there that works for you.

Completely agree with you Digo Ribeiro.  It would be ideal to put the option in the customizable toolbar.  I would place  my 2 language options right there before the undo button.   Switching languages in 1 step will always be faster than 3 steps.

I don’t share your logic Gary.   Why should we stop using an app when there’s a particularity that we don’t like?  It’s not that we don’t like the App per se, we just want to improve some aspects.  There’s no need to be extremists.   And, as Nick mentioned, your suggested method works, and we use it everyday, but… it’s not quick enough, specially if you have to switch languages every 10 minutes in an 8-hour working period.  Ohh, and the right -click solution is actually 3 steps, not 2.

We have different versions of eM Client McClausky, because on mine it just a two click process.

Sorry, I may have misunderstood what “others and myself are not happy with the program” actually means. The logic I followed based on this misunderstanding is that if you are not happy with something, change it. In this case the application is not going to change because after so many years, there are so few votes on this idea. So logically to avoid further unhappiness, the next option is to change to another application. I know for sure that Thunderbird has an add-on that can change dictionaries automatically based on the recipient. Maybe other application offer language features more suited to your needs.

Gary:    We are “generally” happy with EM Client. We all know  nobody’s going to switch to Thunderbird because of the language spell issue.   You logic is correct:  if you’re not entirely happy with something, change it or improve it.  In this case we’ll  keep on voting for ideas and changes to make the application better, even if there are only a few votes.   And regarding the number of clicks, I never said the right click solution was a “3-click” thing.  I said it was a “3-step thing”.    (1) Right click  (2) Go to Spell check, wait for the submenu and choose your language (this step alone takes much more than a simple click)   (3) CLick on chosen language.  It’s annoying, but it doesn’t mean that it creates “unavoidable unhappiness”.   We just need to improve it.

I also would like to see an easier and quicker solution to the multiple language spell check problem.
It could be solved by:

I really hope that this issue gets addressed asap.
Like many other people I constantly have to switch languages (english and dutch, sometimes french).
The way one has to do it now is too inefficient.
So hopefully emClient can soon make our miserable lives a little bit more shiny!

So Nick mentioned something about keyboards. Just to expand on how that might work, as some might find it useful. It is a limited work around for those who want to flip quickly between languages with hotkeys. Also, I can only be sure it works on Windows as I have no Mac to test it on.
It goes like this. Go to Menu>Settings> General tab> Spell-Check (make sure you have installed all the dictionaries you want to be flipping between). In Mail Spell-Checker select Keyboard language.

Then in windows make sure you have the same keyboards downloaded as well. If you now use the WIN +space shortcut you can switch the spellcheck language by hotkey switching the keyboard language.
Obviously this doesn’t work well for people who want to type with only 1 keyboard in multiple languages (I imagine German and French users would not benefit much from this work-around)

Gary: I actually am exploring em client because the default Windows mail client doesn’t have auto-spellcheck detection for multiple languages. I’m Dutch, I write in English and Bulgarian frequently as well. Most people in the Netherlands speak English and Dutch and many many have to write in both on daily basis. We are 17 million people. Obviously not all use em client, but this would be a feature that would make this client a lot more desirable to a lot of people.

It’s the 21st century and in Europe at least … 2 languages is the standard, 3 is pretty common and some speak 5 or 6. It’s a necessity and an expected skill.

Personally I like the suggestion of having the spell-check language as a removable button on the op top navigation bar. Those who use it frequently can make it visible and choose from a drop-down menu and those who don’t, don’t even have to have it visible. Simple UI look preserved, functionality preserved, great feature added! * happy dance*

Can we make that happen?

I whole-heartedly support this request. Action on it is long, long overdue. “Select spell-checker language” is not even available amongst the many options that can be added to the ‘new message’ toolbar. It can only be reached through deep drilling through the main menu, when writing a new message. And the suggestion to select a different keyboard layout is ridiculous. I am not intending to order language specific keyboards from abroad at high cost and then connect a different keyboard every time that I write a message.

Other than that, eM Client suits me well.

It can only be reached through deep drilling through the main menu, when writing a new message

No, it is a single right-click where you are composing your new message and then selecting the spell check language. 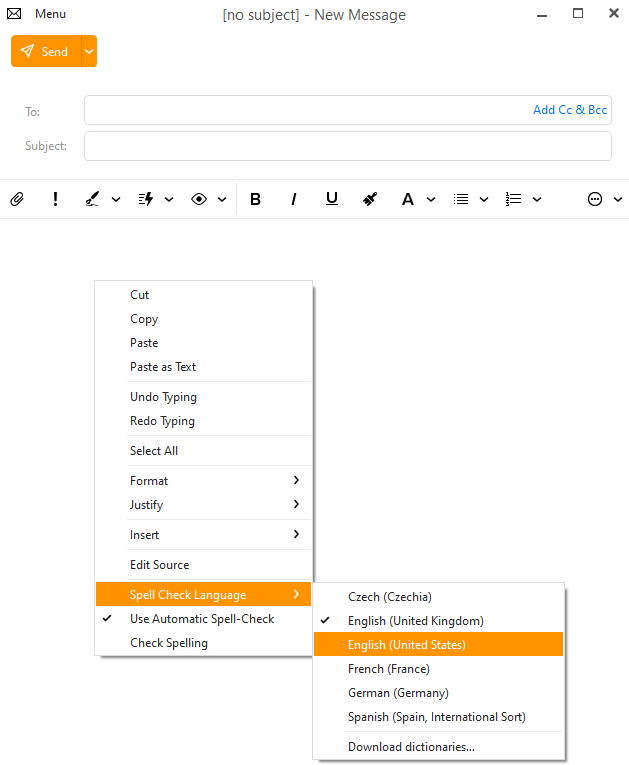 Thank you Gary. For me, this is acceptable. But it is not shown that way in the documentation. On page 240 of the documentation, it only shows the roundabout way: Menu > Tools > Spell-Check Langauge > . See attached.

Spellchecker route1293×573 68.9 KB
Perhaps the file documentation.pdf on your web site needs updating. According to its properties, it was last updated on 15-08-2018.

Perhaps the file documentation.pdf on your web site needs updating.

Yes, eM Client is so far behind on updating their documentation that some new features introduced in version 7 are not even mentioned, and some of the screen-shots are still from version 6. Now we are in version 8!

Personally I do not hold much hope for it ever catching up.

Isn’t the web based documentation quite up to date, which you see if you hit F1 in eM Client?
https://www.emclient.com/webdocumentation/en/8.1/eMClient/Default.htm

Yes, it appears to have been updated recently. Wow!

The internal version I am using still goes to the 7.1 page though.