The undo delete blue tab that appears right after you delete an email, has become very large and takes up the whole email field of view now, it stays that way for several seconds before going way, how can I disable this feature?

Hello, can you post here a screenshot of that?

I personally don’t think the Blue undo banners are too too big as you want to see them to catch your eye.

Here is the messages on the bottom “Blue Undo” banner

Here is the messages on the right “Blue Undo” banner

However There is a problem (i have just noticed) with the “Undo Blue Button” with Gmail Inboxes and the eM Client V 8.1.1054 that i (have replicated) over and over on two different Win 10 computers and two different Gmail accounts.

If you delete an email from a Gmail Inbox within eM Client and click the “Blue Undo” button, the email you just deleted appears back in the Gmail Inbox for only 1-2secs and then only shows in “All Mail” ? You then have to drag it back from All Mail to your Gmail Inbox.

Note:- If i delete emails via both Inboxes (in Gmail online via the web) and click undo on the web they do go back to the Inbox and stay in the Inbox. It’s only eM Client that has this undo issue.

I’m experiencing the same thing as cjeffh1. I have a Windows 10 machine running the latest EMClient. This machine is headless (no monitor, keyboard or mouse). I access it only via RDP (it’s on my local LAN). Recently, I noticed a blue “undo” screen that would pop up when I would delete mail. At first I saw the blue screen and could read the undo | whatever option (I forget the other option besides Undo). The screen would stay up for seconds or longer and would cover up my whole message pane (where my list of messages is). I opened a ticket about it. Ever since that time, I can’t even see the “undo” dialog or words – I just see a complete blue background where the message pane is. The blue background shows itself immediately after I delete some mail, and sometimes it goes away within about two seconds and sometimes it takes 10 or more seconds to disappear. During that whole time, I can’t manage/read any of my email. 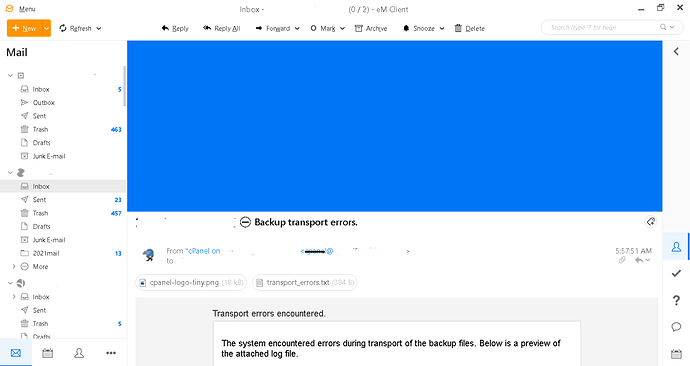 Update: I was two minor versions behind. But, before I upgraded I simply shut down EM Client. Then, when I started it back up, it returned to the normal, small “Mail Deleted Undo” that is unobtrusive, disappears fairly quickly, and doesn’t hamper my email activities.

I did, however, shut down again and update just to make sure I was on the latest version.

So if you happen to end up with a blue background covering your whole message pane (where all of your messages are listed) after initiating a delete, I’d suggest shutting down EMClient and waiting til you are sure it is completely shut down, and then starting it up again to see if the issue disappears.

I still would ask that there be a “feature” added that allows one to totally disable the Undo function and not allow the little blue popup to even appear. I’ve never needed Undo in 29 years on the Internet, and I don’t really need it now. 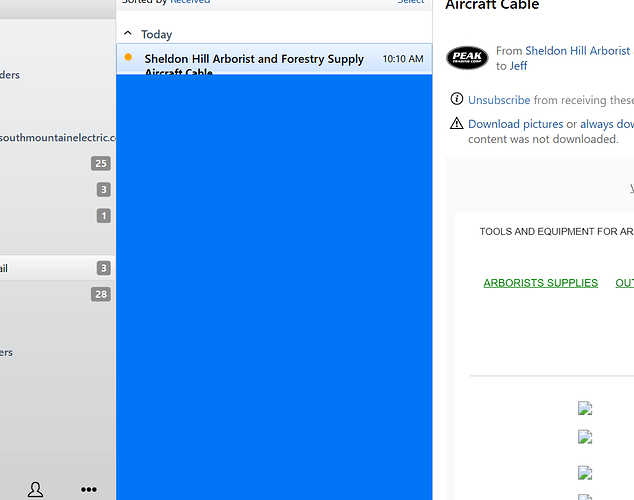 here is a screen shot of the blue undo delete tab

I shut em client down completely, problem still there after restart.

@cjeffh1 @mtindor I cannot replicate that (Large Blue) Banner covering on either of my Win 10 PC’s and only the normal “Small Blue Undo” banner.

How do you get that exact large blue undo banner to appear ? Do you click on any particular thing ?

I wonder if that issue is to do with specific brand “Video Cards & Drivers”.

I am personally using two AMD RX 570 & RX 580 with the latest Radeon drivers & no issues. Might be some sort of eg: Nvidia driver problem. What brand and model video card are you using ?

Video cards and drivers? Come on. I haven’t had a video card / driver issue in 20 years. That is a thing of the past for all but high-end esoteric gaming video cards.

If I knew how to reproduce it, I’d probably have a better idea of why it happened and how to prevent it. I can’t reproduce it now – now that it’s “fixed”

I’m running Intel machines, with 3rd through 7th gen CPUs with built-in graphics. The built-in graphics chips and drivers are prolific – probably millions out there. Any issues with that kind of stuff was worked out before they ever hit market.

Anyway, as I mentioned, my “fix” was simply restarting EM Client. I don’t know what caused the all blue message pane. I don’t know exactly when that Undo stuff was implemented, but it was within the past few months at most – because I had never ever seen a message about Undo except within the last 30 days. Hopefully they will make it possible to simply disable Undo altogether.

Is there any option to not show this blue popup? I use Gmail with IMAP, so I know I can always go to my Trash folder to retrieve an accidentally deleted email. This blue popup covers the next email in line when I delete, so I have to wait a couple seconds for it to disappear before I can see the subject of the next email.