Accounts' folders (in english and french)

I have a sort of problem about the name of the folders of each account. They are all as IMAP. The problem is not the same with all servers.
With one server (two accounts) in eMClient I have :
Boîte de réception
delbox
draftbox
Envoyés
spam
why delbox instead of Corbeille and draftbox instead of Brouillons?
Here is how it looks in the server: 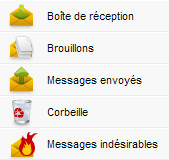 I don’t think it is caused by the translation, because for the accounts on an other server the folders are in french.
An other problem is two folders for sent messages. One is “Envoyés” and the other is “Sent messages”. In the second one are the messages sent using iPhone.

I’ll do this evening. Thanks.

Hello,
I tried so many things following your suggestions through emails, including accounts remove from eMClient and iPhone, different settings made outline and offline in eMClient and configurations on the server, repairs…

I still have files “Corbeille” and “delbox” in both accounts on the same server (Numericable/Noos) with different settings!
I also have similar problems with an other email account on an other server (Zimbra/Free.fr) where appeared files named INBOX.

It is interesting to notice that with other mail accounts on a third server (Gandi-Roundcube), there are not such problems.

I think the best to do for me and for you is to wait next or final version 5, because with version 4 the problems where not so many as with 5 beta.

Thank you a lot George. You solved the problem.