Why do you use eM Client?

Well, it took 6 days (+/- .5 day), but all operations including the final Download Messages, have finally finished.

Things do appear to be working much better than before, though some issues still remain.

The eMC mailbox looks nice and tidy with the messages sorted per the rules, and even the Inbox label is not longer lingering on messages after they’ve been moved. However my phone and another imap client show everything in the inbox still. I started a manual sync on my phone and on the original mac. When those finished, if they still see the messages in the Inbox, then i’ll know eMC is not updating the imap server with the changes to the messages. That’s kind of a key part of the process. Otherwise changes from one client won’t be reflected on other clients, which is kind of the point with imap.

@gsy Using IMAP even if you choose to download all messages, you will still see the messages in your inbox on the server and the inbox of any device configured with the same IMAP account. That’s how IMAP normally works.

The only difference with downloading messages offline in an IMAP email setup, from what I know is that you are not waiting to read the IMAP headers everytime you click on them as they have already been downloaded (apart from new mail) so will read nearly instantly rather than waiting.

Also I run Gmail on my Android app and eM Client always reflects any changes the app makes and visa versa. Same goes for my other Live account.

Perhaps I wasn’t clear. I understand this, I use imap across multiple devices. The whole point of imap is that changes made from one client get reflected on the others when they update. I’ve been using imap for email for probably 15+ years at this point. At one point in the past I wrote a tool that read message headers from both POP and IMAP for a project I worked on that needed to monitor inboxes.

The problem is that eMC is NOT sending updates to the gmail server. It appears to be making changes only to its local copy/cache of the messages. This means my phone and other clients still have all the messages in the inbox and most are still marked as unread.

I posted the full details in a top level thread.

Clearly eMC is not doing the final part of the operation, which is to update the imap server of the changes it is making, leaving all the other imap clients to fend for themselves. In short, while it is set up as imap and some operations do update gmail, for the most part it is operating more like pop than imap.

I now have a nice empty inbox, with all messages copied to archive folders or automatically put into desired folders with rules. And all messages marked as read, and no, zero (0), unread messages. All done from within eMC. That part all works great on windows. Or so it seems. The changes are NOT sent back to gmail. They only show up on eMC.

Refresh says everything is synced. You were with me for the last few days of the ~6 day fresh install and full sync. I waited until the final Download Messages was finally complete before doing rules and other things to do the final clean-up and organization of messages.

BTW, one nice thing is you were correct about the refresh speed once things were fully synced. The periodic refresh is MUCH faster now. So that’s good at least. Now if only it would sync the changes back to gmail so I wouldn’t have wasted my evening organization the mailbox for nothing.

That is not an issue for me using eM Client and my Gmail or Live mail IMAP accounts. Any changes i make to eM Client allways reflects on the server end very quickly and all my other devices update the same & visa versa using the latest Windows 10 V20H2 and eM Client V8.2.1237.

Ps You might need your eM Client logs checked by eM Client Devs to see why EMC is not sending the changes back to the IMAP server end as it normally does.

having logs reviewed does seem like it will be needed…

interesting thing i noticed – on gmail itself i have several messages that have the inbox label still attached to the message, even though on eMC it shows it was removed.

Hello GSY,
I would like to clarify some things about GMail here.
The reason why you experience slow synchronization with large GMail mailbox is
because GMail uses throttling for its connections and has bandwidth limits:

That’s the reason why Download messages for offline use is disabled with Gmail accounts by default.
Once you enable this option and your mailbox is 2.5 GB+, you experience such behavior.
This is a thing we can do nothing about it. For version 9 we are working on limited time sync, that may resolve this situation to some degree (eM Client downloads messages for the last year or so).

The reason why we need to download All messages folder instead of particular folders like on other IMAP services is caused by GMail architecture. We won’t be able to mimic advanced scenarios like email tagging and so on if we do it in a different way.

This is a by-product of eM Client supporting all the bells and whistles of GMail.

Thanks for the pointer. Sadly I’m all too familiar with some of those limits. I ran into the connection limit earlier during my email client search and had to close my Mac client and outlook due to too many connections. The 6 days that eMC took to download my mailbox was done with no other clients (well, my phone was still connected) running - I used the web interface. 6 days of annoyance as I do not like gmail’s interface. There’s a reason I use native apps.

At the 2.5 GB per day for IMAP that would align with my 6 day experience.

Though I wonder why Outlook and Apple’s Mail.app seemed to be able to do this in under 2 days. Admittedly, the 2 day time was when the mailbox was closer to 10 gb than the 15 it is now, earlier in 2021.

The big question remains though, why isn’t eMC updating gmail so that changes on the local machine are reflected on gmail (web ui) and other imap clients? Actually, I just checked again this morning. It might have synced over night. I will check. Does eMC delay sending updates to gmail?

The answer may have been in the limits document you sent. Uploads via imap are limited to 500 MB per day. And then this gem, “Reaching the limit triggers a safeguard that temporarily stops IMAP upload for the account.”

It’s possible eMC was blocked from updating due to hitting the limits each day for the last 6 or so days, and after a new day began it was finally able to update. I’ll keep digging to see if the updates do appear to be applied.

I’m not counting the disparity with the Mac’s mail app view of gmail as it seems more out of date and like it needs a full sync again anyway, so I’m only comparing it to my phone (Outlook for Android) and the gmail web UI.

@Michal_Burger well it does seem that is what was happening.

The Apple mail.app was in sync with what was on gmail. I went in to the web UI for gmail and tidied things up a bit. As I did the changes immediately reflected on the mac. Changes that were not in eMC showed up in eMC. Then I used eMC to make some changes and the labels/tags showed up on the gmail UI but messages did not move out of the inbox on the web ui.

I also see eMC periodically trying to upload to the server.

At one point earlier this morning I had the web UI, mac, and eMC agreeing on how things looked. As the day progresses eMC is keeping things the way I want on the eMC interface, but the mac and web UI are now out of sync again. Tomorrow I’ll check again and see if things sync again once the suspected 500 mb limit for today has been reset.

I’ll follow up tomorrow. Hopefully this will be it. If it is, then I finally have eMC mostly working. Who knows, maybe it’ll be fully working. One can hope.

oh, and outlook on android is also in sync.

at this point the mac, gmail’s web ui, and outlook on android all are in sync, as to be expected. only eMC is different at this point. That difference is likely to be a lack of updates from eMC back to gmail. If those changes are sent tomorrow then hopefully all will be in sync.

Thanks Cyberzork for your reply but there’s no way I can do it (unless it is a pro feature, im using the free version). If I right click any label i can only add a new label or edit an existing one, I can’t nest it into another one. If I try to drag and drop an existing label into another one it will just move it up or down. 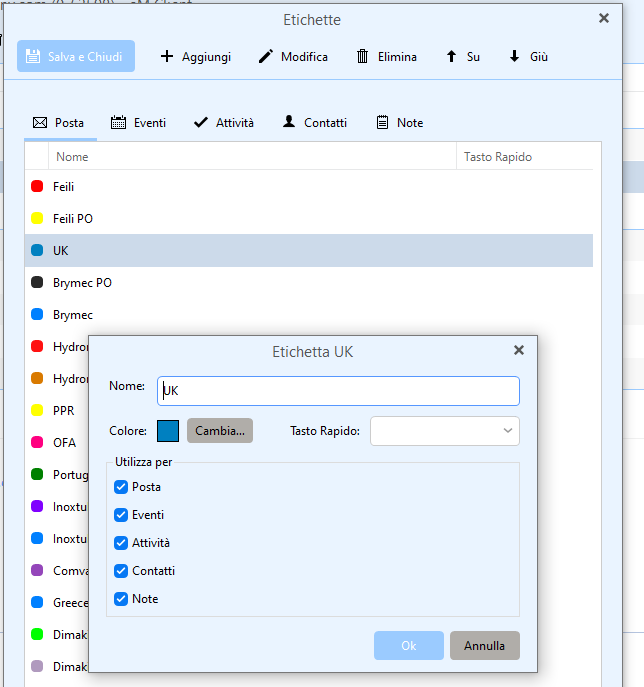 @caravaggio971 You can create nested labels (under any parent / root label) with the free version on any eg: IMAP or POP account. That is strange you cannot. Could be something with your specific email type account ?. Hopefully someone on this forum may know why you cannot.

Here is an example where i am using a regular IMAP ISP account in eM Client V8.2.x for Windows.

I have a “Test” parent folder / label and are going to create another “Test 1” folder nested underneath.

Figured I owed an update given all my complaining.

Not sure what is going on, perhaps it’s on gmail’s side? However it started working. Then it stopped, then started again. Right now it’s hit or miss whether the rules will move the folders. The main thing is that I can use my phone again as most rules seem to be moving messages now.

Sometimes it stops, for a while, but at least it works now more than it doesn’t.

Still have some issues with rules, on a real imap account too, so i’ve got a ticket opened for that.