I just had to comfort my wife who is in despair and tearful at the result of updating EMClient: the entire look is radically changed, her carefully constructed different in-boxes have disappeared (with everything dumped into a single in-box), the “Trash” bin has gone, the appearance is incomprehensible… Is it possible to revert to the previous setup? I use EMClient myself but I have postponed updating it because I do not want the same disaster: life’s too short, we’re too busy, to deal with badly managed updates like this. I’ve quite liked EMClient so far, but if this sort of thing happens we’ll have to use a different email client.

Thanks for asking - not sure what version previously (not the sort of thing we have time to think about!) but the update my wife did was to version 8.1.979.0

If you have a recent backup, you can open the zip file and find the manifest.xml file. Open that with your preferred text editor and it will give you the version of eM Client used to make the backup. Something like <AppVersion>8.1.875.0</AppVersion>. It’s not that important but would enable me to describe the differences and where to find them in the current version.

If you don’t have that can you explain a bit how the look has changed. Within version 8.1 upgrades there shouldn’t be any visual changes, and probably not anything significant from 8.0.x. Some differences are there from version 7.x like the section tabs became buttons but that difference should not be catastrophic.

Maybe a screenshot indicating what you are referring to if you can’t describe it otherwise.

eM Client won’t combine messages into a single folder, but maybe what she is looking at is the All Inboxes folder. That is a filter that displays all the messages together, but the actual messages are still in their separate folders. Just scroll down a bit further to see the individual inboxes.

Some folders may have been hidden in the More folder during the upgrade. I think that was something new in 8.1. If they are there, you can right-click on them and choose Show. They will be moved back to their original location. 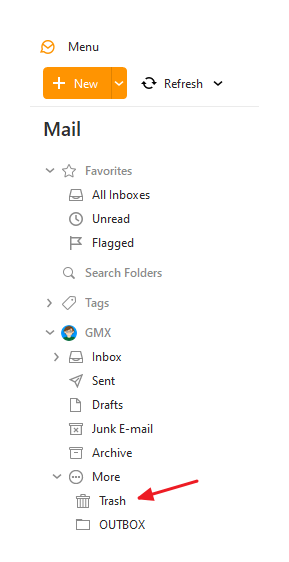 If you want to revert to a previous version, you will need a backup from that version, and the version number listed in the manifest.xml file.

Gary, that’s very helpful. We’re looking again at the new updated screen and following your guidance. Unfortunately my wife has not been in the habit of backing up her EMClient…
Thanks, and regards

Well, hopefully she will find everything is still there, and after a few days of getting used to any differences in the appearance, she will find the latest version a whole lot better and won’t need to revert to an older release.

If you do need to downgrade though, there are ways without a backup, but I will need to write a how-to.

Gary, I’ll bear that in mind. Thanks again.