Windows 7 PC. Still trying to get to grips with EMC. Despite the option to save a copy of sent mail it just disappears after sending. I’ve checked all the relevant places it might be (Sent, Outbox, etc., global and specific account), but no sign of it. A message sent a couple of days ago did save a copy, but since then messages have simply vanished.

Also, somewhere in settings (can’t find it now) I selected an option for a confirmation window to appear when sending and receiving. It works for receiving but not for sending, so I’ve no idea whether it’s been sent or not. .

Any ideas or suggestions please? It’s maddening to spend an hour or more writing a letter, only to have it vanish without trace as soon as the Send button is clicked. Oh, and that’s another thing—it’s supposed to run a spelling check but that’s not happening either.

Do you have an IMAP or POP setup ? Also what version of eM Client are you running ?

See if the sent mail is in the “Local Folders” (at the bottom left). To enable local folders in eg: eM Client for Windows, click “Menu / Settings / General” and check the box, “Show Local folders”. 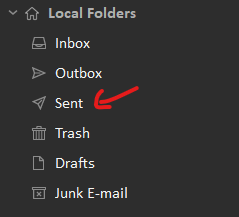 Btw - I would reccomend you upgrade to at least Windows 10 due to Win 7 and even Win 8.1 are “now no longer secure or supported” Very risky running an older OS particularly with viruses / malware etc.

Thanks cyberzork. Mail setup is POP3, eM Client version 8.2.1659 (845a639) (presumably the latest, since downloaded and installed only a few days ago.

Believe me, I’ve looked everywhere, in all Sent folders and various others. Sent messages have just disappeared, and, as I say, no dialogue box to say they’re being sent, so I’ve no idea whether they’ve gone out or been deleted. Have had to resort to text messages asking recipients to confirm, and will have to BCC myself to keep a copy. Hopeless, not to put too fine a point on the matter—frustrating and extremely disappointing.

Appreciate your advice re. old OS, but this 9-year-old PC will soldier on as is until it croaks. I won’t deal with the time-wasting hell of getting used to something else until forced to (as with EMC at present). I believe the PC is well protected by third-party security, and emails are screened by MailWasher on the server before reaching the machine.

Ok i personally haven’t been able to replicate that issue setting up a test POP account in eM Client.

When you setup the POP account manually via “Add Account / Mail / Other” , at the end you can specify whether you want your messages in a “Separate Folder Tree” or “Store messages in local folders”. Maybe suggest to try both options and see if your sent mail appears.

Note:- As you have POP mail if you do remove and re-add your POP account to test, create a folder down in “Local Folders” temporarily called eg: Old Mail and drag all your POP mail there. Then once you have resetup your POP account, drag your old mail back to the original folder locations.

Thanks once again for suggestions and clear instructions, and for all your other patient help.

Quite by accident I’ve discovered that copies of sent mail have been placed arbitrarily in one of my personal correspondence folders. It’s also misplaced a number of messages when I’ve moved them. How that’s happened I simply can’t imagine, but it’s the last straw—trying to keep control with this erratic behaviour going on is a time-wasting nightmare. I’ve spent most of the past several days trying to make sense of EMC and getting it to behave in a rational and predictable manner. Some aspects of the client are really good, but too many are difficult and unintuitive, some functions don’t work as they should, and the problem of backing up the clumsy database configuration has been a concern.

I’ve now done what I should have in the first place and updated my very old version of Thunderbird, and I have to say it’s a relief to get back to a programme that’s so easy to understand, configure and work with.

Again my sincere thanks for the time you’ve spent trying to help, and apologies that it’s been in vain. With best wishes.

Actually, windows 8 will continue getting security updates until Jan 10, 2023. You are correct about windows 7 though. It is totally abandoned.

One of the reasons it is so easy to understand is that many years ago Mozilla essentially abandoned it. It gets security updates, but nothing else. I have clients still using it, but won’t recommend it to anyone, because it is not in active development and hasn’t been for years.

At the risk of being perverse, if Mozilla has stopped meddling with Thunderbird then that’s a huge plus as far as I’m concerned. I stopped updating it years ago because they kept making unnecessary changes that appeared to be a deliberate campaign to alienate their users.

For the IT challenged individual it’s so much easier and more user-friendly than other clients I’ve tried. I gave Postbox a go before EMC, and that was even more confusing and time-intense. All very clever, no doubt, but way over the top for my needs.

I’m sorry you are looking at it that way. Each month Microsoft patches 50 - 100 known security vulnerabilities. Continuing to use Windows 7 is a mistake. With each update, Thunderbird patches known security flaws. To not implement them, is a mistake. In fact, it is a mistake to not update any software that connects to the world. Browsers, email programs, zoom, anything that touches the web.

As far as keeping it simple is concerned, that doesn’t work. People always get more desires. It can’t be stopped. They want sent emails to appear in another place, spell check to work some other way, Confirmation windows for both or either server confirmation or open confirmation. Connecting calendars and contacts that will sync, etc.

Finally, after a few years, users get annoyed that the style of the software is “old fashioned”, and move on to software that is modern looking.

Developers may start with a clean simple design, but it will inevitably grow as more requests come in for more stuff, or at least a modern look.

While I appreciate your concern and advice, I’m afraid I won’t be acting on it. This PC is nine years old, and only when it croaks and I have to replace it will I sacrifice too much from my pension to keep Microsoft in the style they’re accustomed to. Not that I’m a cynic, you understand. That aside, I really haven’t the time or patience to keep adjusting to new things that work differently from those I’m used to—I’ve better things to do with my time.

In short, I’m like the average car driver who couldn’t care less what goes on under the bonnet (hood) as long as the infernal thing works when he turns the key; and who certainly doesn’t want to spend his waking hours tinkering with it. Meanwhile I rely upon sensible practices and third-party security software that constantly updates itself.

Understood about the eternal need for more and (supposedly) better in everything, but afraid that’s not me. If it’s not broken, don’t fix it, is my philosophy.

However, an exception to the rule is the Opera browser, once very simple, robust, and efficient. The latest version has a suite of really excellent, useful features so is no longer the “stripped down” platform of old, but somehow they’ve managed to keep it clean and uncluttered and easy for the simpletons among us—I allude to myself—to understand. If only other developers could emulate this form of “progress”, rather than the bloated, obese programmes that are difficult to configure and understand, laden with features a great many people will never use.

Quite by accident I’ve discovered that copies of sent mail have been placed arbitrarily in one of my personal correspondence folders. It’s also misplaced a number of messages when I’ve moved them. How that’s happened I simply can’t imagine.

This could be happening due to the fact that you (are running a very old OS) and eg: Could be the latest eM Client V8 was (not designed to run on that old OS) as alot has changed in the OS itself.

So as you are sticking to Win 7, I would suggest to try installing the last Versions 6 & 7 of eM Client from the version history page to see if that fixes the issue with your sent POP mail, as these eM Client versions would have been more suited to the older Windows OS’s. Yes you will have less features but it might solve the issue.

Also agree with @steveshank “Continuing to use Windows 7 is a mistake” Good luck !.

If this is happening for all sent messages, then you may have created a Rule to do that. Please go to Menu > Rules, and disable all Rules. Then back in eM Client send a test message. Where does it end up?

Or are you maybe confused by the conversation feature of eM Client? If you have a message in one of these folders and you reply to it, the sent message will be displayed there as well. Right-click in the message body of the sent message and choose Properties. This will display the folder location of the message. Where is it?

I’m like the average car driver who couldn’t care less what goes on under the bonnet (hood) as long as the infernal thing works when he turns the key; and who certainly doesn’t want to spend his waking hours tinkering with it.

Don’t know about elsewhere, but here in the UK your car needs to pass an annual MOT to ensure that it is up to standards. If it is not, it can’t be driven on the road.

Conversations are disabled. It was one of the first things I did.

Don’t know about elsewhere, but here in the UK your car needs to pass an annual MOT to ensure that it is up to standards. If it is not, it can’t be driven on the road.

Actually that’s not true. I happen to be forum moderator for a British-based one-make vintage car club. All the qualifying cars of members are over 70 years old and therefore don’t need an MoT. That said, while it’s still incumbent upon owners of aged vehicles to maintain them in roadworthy condition, brakes, steering, etc. obviously do not meet modern standards!

Please, gents, don’t waste any more of your time on me. As mentioned above, the updated Thunderbird appears to be stable and better suited to my needs. I have to say this is a marvellous forum and the help I’ve received outstanding, for which grateful thanks once again.