Is this a bug in the client? What can be done to restore the items?

I use a pop mail service (netaddress.com) and do not retain items on the server. All items are downloaded to my local database

Any suggestions to restore the missing items would be appreciated

I just looked through my sent items, trash, and junk folders. Same bug.

If you do, look in the Archive folder and see if your message are there.

i do not have archiving turned on

It looked like it may be automatic archiving because of the dates. As you don’t have that enabled I was thinking maybe your server is doing it. But if you are using POP3 that is not the case.

Did you try searching for one of the missing messages?

If that does not turn up anything, a restore is going to be the only solution. It will be a bit tricky because a restore will replace all your current data so you would normally lose some messages. But if you have a backup done on 10/30/2020, then what you do is first export all messages on your computer sent or received after that date. You then do the restore, and import the just exported messages.

I had the same problem earlier this year – an entire year of emails on my @icloud account just disappeared. And eM Client provided absolutely no help and claimed it was all not their fault. The fact that you lost @gmail mail only proves to me that they have a serious serious glitch that they are not dealing with or admitting.

The fact that you lost @gmail mail only

What makes you say that? Second, as he appears to have experienced exactly what I experienced and we both use eM Client, my comment/reply is very valid and quite possibly helpful for him (and you) to know.

Steve said he is using netadress.com, not Gmail. Why would you say he lost only Gmail messages? There is no connection.

Anyway, he has not replied to my question, so we don’t know that he has even lost anything yet.

I can confirm that I don’t use GMail. I use a web-based POP3 server called netaddress.com

The way that I verified the messages were missing was pretty low tech. I sort the inbox by “date received”, then scroll down through the list. Doing that, I can see the range of dates that are missing.

I had never done a backup using eM Client. Didn’t even know about the feature, but I have it turned on now.

I do have WIndows backups turned on, so I can restore from that. Do I just restore all of the directories under C:\Users\DocHudson\AppData\Roaming\eM Client in order to restore? Anything i have to do other than restore the backup?

Did you do a search to confirm they aren’t anywhere else in eM Client?

You can search for messages within a time period, so something like: 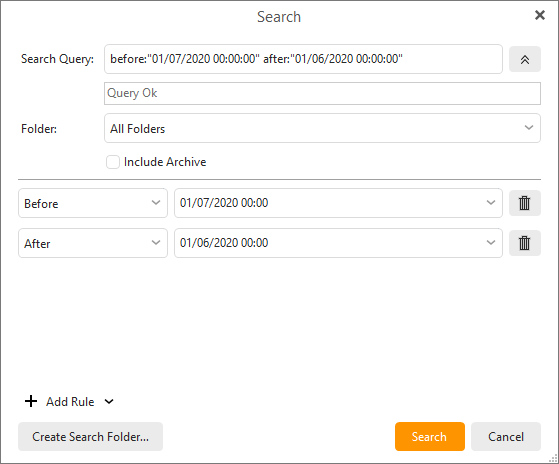 It is important to have all folders selected as above.

A Windows backup may not work. External backup applications usually skip files that are open, and that will result in an empty database if you try to restore it. But you could try it. First make a backup of your current database just to be safe. Then export all of the new data in eM Client since the Windows backup.

Close eM Client and do the Windows restore of that directory you quoted.

Restart eM Client and import that data you just exported.

I tried your search idea. It turned up no email in the date range. I tested a couple of other date ranges just to be sure I was using Search correctly and those other tests did work.

So, I’m pretty sure my messages are gone.

Will try the file restore mechanism that you suggested

If they were IMAP folders, I would suggest you try and repair them as the cache may have become corrupted. But local folders work differently so that is not an option.

Just don’t forget to do your backup first. You don’t want to lose your current data as well if anything goes wrong.

But the good news is that your process worked just fine. Now i have to try to find an older backup to restore from

Still doesn’t answer the question about how all of those emails disappeared. It has to be something in the software to make such a huge block of messages just evaporate

Could this be a problem associated with using the free version of eM Client? I recall having some problems with a version update associated with my free license. Could that have caused a database corruption?

Could this be a problem associated with using the free version of eM Client?

No. There is only one version of eM Client, with a few features restricted when using a Free License.

It is a puzzle though. My initial suspicion that this was caused by Automatic Archiving is not totally plausible either, because that would have moved all message before a certain date. It would not have moved a middle chunk of them.

One possibility is that the POP3 account was removed from eM Client, then added again. That would certainly account for missing messages in the Inbox, but it would mean that Junk, Trash and Sent would be missing all messages before a certain date. Not just a middle section.

Could that have caused a database corruption?

A licensing issue would not have caused loss of data, but it is entirely possible that an upgrade could have done that as with some upgrades, the database structure is changed. If there was some error reading the database at that time, it is possible.