Is there a consistent keyboard only way to manipulate the column headings, etc., at the top of the message list in the main window? e.g. to change message sorting and filtering only via the keyboard

In the eMclient main window, at the top of the message list, I can right-click to get options related to column headings, sorting, etc. 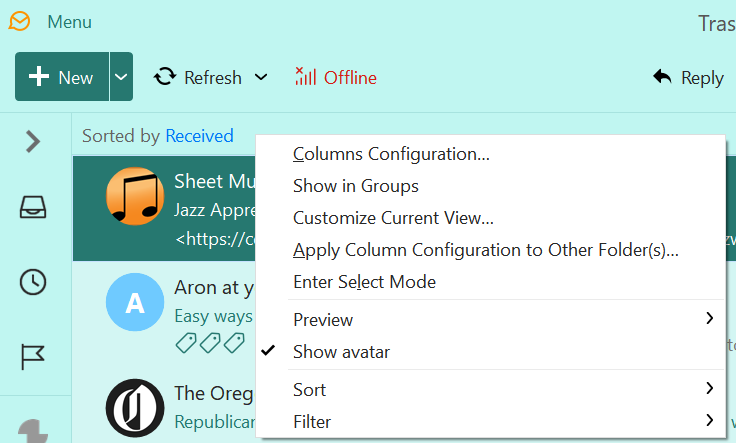 Q: Is there a way to get to this menu using only the keyboard?

I would very much like to be able to control sorting from a speech command.

At the moment I can write speech commands that do things like “Sort by Subject”, but only if the mouse is already positioned above the column headers. which is a pain when using the mouse is painful.

—+ my usual explanation about why consistent keyboard only accessibility is good

Unfortunately, as I described in https://forum.emclient.com/t/emclient-support-for-accessibility-via-speech-recognition-navigation-of-menus-etc, I suffer “computeritis” pain that makes using a mouse and typing using a keyboard painful and difficult and try to use speech recognition to control my computer as much as possible.

I so far have not found any way to access this menu by keyboard only. I do not appear to be able to get to it by navigating through GUI items e.g. by back tab, etc. but of course I might’ve missed that.

So would all depends on how many other peeps using eM Client would need Voice control to warrant the company doing this in the future.

@cyberzork said: eM Client I suspect would have to be special modified to support all menus using voice control… So would all depends on […market size…]

That is why I wrote the long explanation in https://forum.emclient.com/t/emclient-support-for-accessibility-via-speech-recognition-navigation-of-menus-etc,

Frankly, I don’t want any special modifications to support Microsoft SAPI (Speech API). That’s a lot of work, and frankly it’s nowhere near as good as you might think it would be. IMHO the most speech friendly application that I use is good old emacs, totally non-speech-aware: it wins because it has a command language, not because It exposes the menus. Frankly navigating menus by voice is tiresome and inefficient.

A consistent keyboard only UI just make sure that there is a way to move the focus to any GUI item by keyboard commands. Possibly just a single keyboard command, like BackTab to go from one GUI element to another. Ideally also there is a way to move directly to one or more known good fixed places, so that other GUI elements can be reached with keyword sequences that do not change.

It’s not that hard.

It also has a big advantage: it makes it a lot easier to automate software testing. Sure, you probably have a test set up that will move a mouse pointer around and send events. (If you don’t, then a few years ago I could have sold you one.) But unless your test setup is scraping the screen pixels to see where it should move the mouse pointer to… Well, far too many companies don’t really test this except on a few configurations of displays and window sizes, because minor rendering changes ingeniously scaling can break your test. Consistent keyboard interfaces don’t fix the mouse part, but they give you a way of completely testing your GUI via the keyboard interface. And that makes it easier to test the display and window size dependent mouse pointer stuff, because you don’t need to use it for the basic functionality test. (If y’all know about Agile Programming, Kent Beck says that he came up with the unit testing approach as a way of avoiding as many problems as possible related to mouse driven GUI testing.)

As for the market: It is not just the number of people who use. That small market is multiplied by ADA (Americans with Disability Act) requirements that computer systems used by the federal government and organizations that it funds must be accessible. Most private companies try to follow ADA requirements, so that they are allowed to receive US federal government funding. For organizations and companies trying to do this, if they are considering purchasing an email program, and if there are two or more email programs in the market, one of which is accessible and others of which is not, Then they can purchase just the accessible software, or they can purchase the less accessible software for general use but also have to purchase fewer copies of the accessible software for employees who need to use it. Which do you think an IT department prefers?: Having to maintain two different versions of software, or one-stop shopping? Risking ADA lawsuits?

Anyway, I don’t like the ADA lawsuit trolls that are becoming more and more common.

I’m just trying to teach people that is really pretty easy to create a consistent keyboard GUI. You already do hotkeys and menu accelerators, you just need to do them a bit more carefully.

Besides, I am asking if there is already a consistent keyboard only way to manipulate the column headings, sorting, and in a separate post do message formatting.

There may be such a way that I have not been able to find. AFAICT eMclient’s keyboard interface is not fully documented.

Thew short answer is NO.

eM Client is optimized for mouse and touch screens. There are some basic keyboard shortcuts available, but nothing like what you ask.

You will find all keyboard shortcut options in Menu > Settings > General > Shortcuts.

Gary: You will find all keyboard shortcut options in Menu > Settings > General > Shortcuts

I checked that before I asked.

BTW I already found a few keyboard shortcuts that are not in Menu > Settings > General > Shortcuts, but which are mentioned in other webpages.