How do you backup settings if you can't load emclient?

Is there a folder or a set of files that can be copied out before wiping out/re-installing emclient so that settings can be restored?

(In my case, I cannot load eMClient and the remedy looks like a complete wipe of settings and database, but I have a lot of customization - rules, templates, etc.)

Is there a folder or a set of files that can be copied out before wiping out/re-installing emclient so that settings can be restored?

(1) This is one option… to export settings: 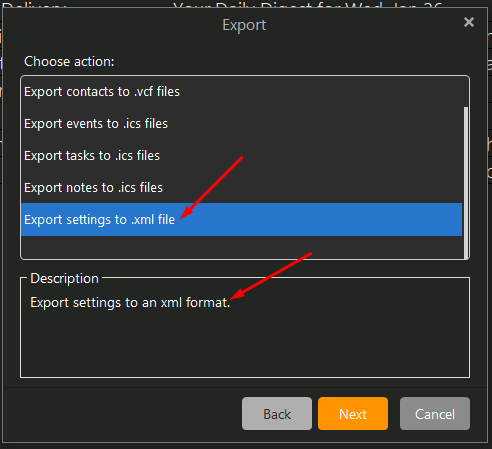 In the folder C:\Users\your user name\AppData\Roaming\eM Client\ there are several “settings files” in my version. I have never tried this but perhaps backing them up would serve your purpose.

Hopefully someone else in the forum will join in with their take on this option.

As for not being able to start eMC, describing the problem you are having, with enough details and setup, might allow one of us to suggest some remedies.

Starting up eMClient goes through the normal “I have to check the databases because I didn’t shut down properly”. It finishes that process and immediately crashes.

The full error report is really long, and I don’t know that I should post it here, but here is the beginning of the exception:

I suspect there is a call based on something like an old XMPP protocol that I have had defined for a long time going through Google’s hangouts which is no longer handled by the DLL. I suspect it is deprecated but doesn’t handle well the existence of the account and can’t grandfather it in.

Seems like to fix this, I should wipe out all accounts and re-create them. This will limit it to viable accounts. I don’t want, however, to lose my other settings.

I see those files and will try to give it a go… thank you for your help.

That worked a treat.
I have renamed the Rules & Templates files (three earch) and restored from the backup I made before uninstalling the software.

Everything is in its right place.
Licensing is apparently the only thing I have left to figure out.