The Agenda widget (right…?) in my Calendar view has a lot (9!) of groups/categories listed: 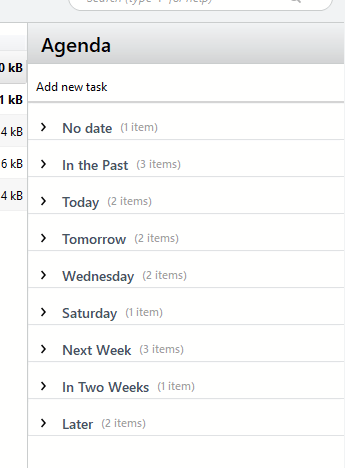 I personally don’t need or benefit at all from several of these, including “In the Past”, “In Two Weeks”, and Later (which presumably lists all future tasks, etc. no matter how far in future). It’s just too granular and is effectivly “noise” when I try to quickly see what’s coming up for me in the next few days.

Is there a way to not display any/all of these? I see where I can somewhat personalize what gets displayed using the “gear” icon displayed in gray bar when cursor hovers there, but the choices there are not sufficient to accomplish what I’d like (although, happily, those selections demonstrate that it is possible for users to mange what gets displayed).

If no way currently exists, can a feature/enhancement be requested to allow for what I have described? Honestly, the “Today”, Tomorrow", “Next Day”, Next Next Day" groups are superfluous…at least to me. Speaking for myself I’d just like to see the next N days previewed, where “N” is defined by user.

Hover over the word Agenda and you will see a settings cog. 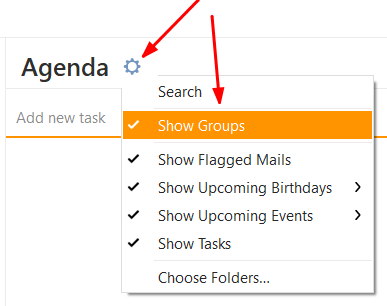 Hover over the word Agenda and you will see a settings cog.

I specifically covered that here:

I see where I can somewhat personalize what gets displayed using the “gear” icon displayed in gray bar when cursor hovers there, but the choices there are not sufficient to accomplish what I’d like

Grouped or not, tasks are being listed that I am not interested in seeing, especially completed tasks and tasks far enough in the future that displaying them is not that helpful.

These items are listed under “Agenda”. As I see it, an agenda is not usually considered to include all things done in the past plus all things to be done in the future. It is more typically/usefully defined as those things scheduled to be done in the “near” term, “near” being best defined by a parameter set by the owner of an agenda.

So 1) is that understood? i.e. was I clearer this time? And 2) if not doable within the current system (it appears not), is it a reasonable candidate for a feature/enhancement request?

tasks are being listed that I am not interested in seeing

Then disable the Tasks from appearing in the Agenda. 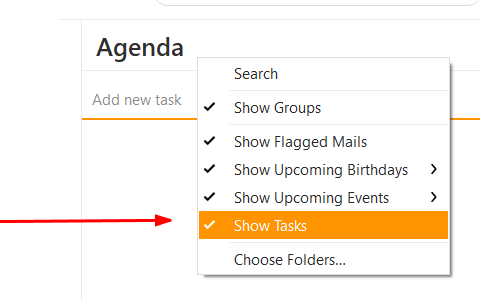 But if you are interested in showing some tasks, in version 9 we have some additional options of what tasks to show. 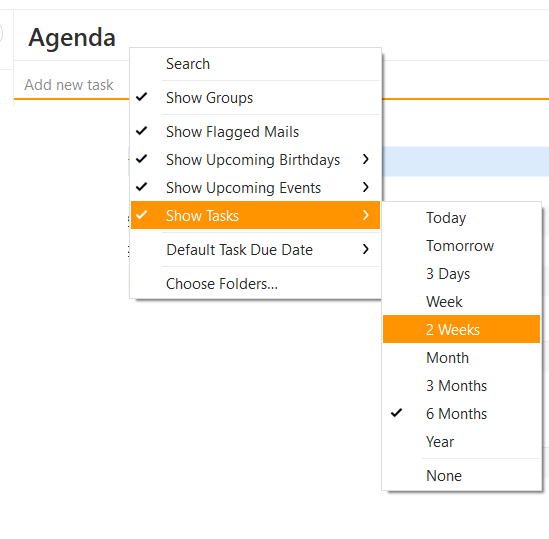 The tasks are also displayed differently. No longer listed above the other Agenda items if they have no date. They either appear on the dates, or below the other items in the Someday Group (means no date assigned to them).

I am not interested in seeing, especially completed tasks

You don’t need to. If a task is completed, it will not be displayed in the Agenda.

It may be more beneficial for you to try the version 9 beta release. Just like the MS Outlook import as I mentioned in your support ticket, many things have been improved or changed for version 9.

To try the beta, first make a backup using Menu > Backup. This is in case you want to revert to version 8 later, as the version 9 database will not be usable with version 8.

Then download the latest 9 release in the Release History.

…in version 9 we have some additional options of what tasks to show.

As a general rule I have always been a little skittish about upgrading to Beta versions of anything…for so many reasons. But in this case it seems in order as the eM/C team seems happy to take comments and suggestions for improvements and fixes so well.