If I delete a repeating event/task from either of the Agenda views, I get a confirmation message like this: 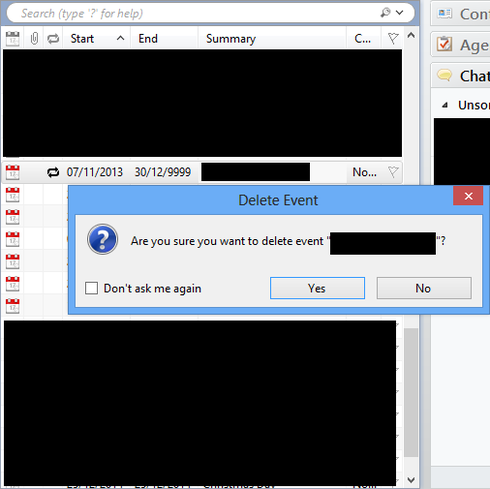 This appears to be referring to the _event_, but if I press “Yes”, it deletes the entire _series_!

When deleting an event/task from Agenda you should be asked if you want delete the whole series or an occurrence only. Are you sure it was a recurrent event? Can you try that again please?

I just tried it again, and the functionality is definitely as I described above; it doesn’t ask whether I want to delete the series or the single occurrence. The item was definitely recurring.

Then create a recurrence task/event again, save it and send it directly to me at wilson@emclient.com

Ok. I just sent one to you.

I just played around with this some more, and I’ve realised that there are actually two separate problems with eM Client here:
-Deleting recurring calendar appointments from the calendar’s agenda view always deletes the series. This looks like a bug.
-The confirmation prompt for the deletion of any occurrence or series is ambiguous, but after clicking “Yes”, eM Client presents a second prompt that disambiguates the first. I think this is a design flaw; eM Client should only show the second prompt so that users don’t get scared away by the ambiguity of the first. (The issue is a user might not want to agree to delete the event/task without the program clearly stating whether it would be deleting the series or occurrence.)

You are right, I tested it in Agenda in Sidebar. My mistake …

The problem is that in Agenda view are not shown any occurrences separately. Events are shown as series so you are asked only once if you want to delete it.
Your second suggestion will be considered.